As it turns out, history had already determined that state handouts to attract and keep businesses was a horrible idea, so bad in fact many states amended their Constitutions to prevent those mistakes from ever happening again in the future.

After reading the Cap Times article "Where to now with Foxconn? It won’t leave Wisconsin, but it won't build what it promised," where every paragraph revealed another strange twist or failure, I had to look up why Scott Walker and his band of plundering Republicans pirates liked the idea of state corporate handouts so much. Not surprisingly, their actions weren't based on anything I found in the real world, it was simply pure ideological theory. Look at how much money we're losing, and how few jobs they're creating... 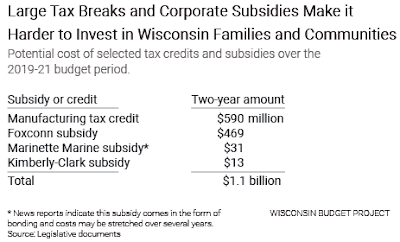 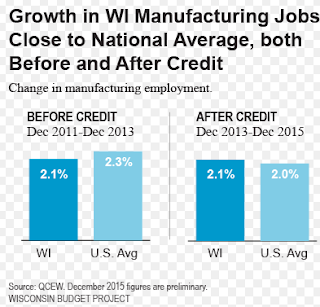 Let's do a little research our Republican majority didn't bother to do with Foxconn or the manufacturing tax credit:

“Incentives do not have a large correlation with a state’s current or past unemployment or income levels or with future economic growth,” Bartik writes. Incentives are not the result of economic or fiscal conditions but reflect state politics and past practices. In other words, some states like to give away more money to business than others—for no obvious economic reasons.

That would be the manufacturers tax credit, resulting in no noticeable new job creation and a loss of much needed state tax revenue: 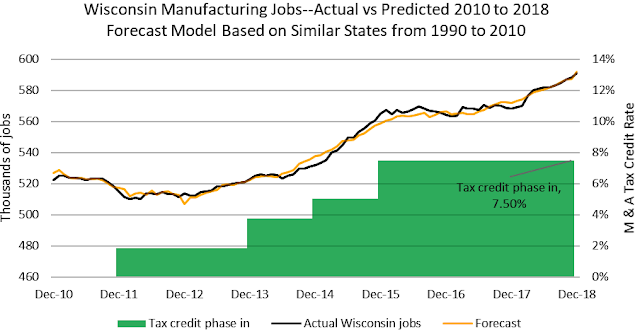 State Incentives Negative Impact: Research has been telling us this for years, it's only Republicans who believe in tax cut magic:

A 2002 study of some 350 companies that received incentives found a negative effect on their ability to create jobs. Companies that received incentives expanded more slowly than others, and the overall effect of incentives was a reduction of 10.5 jobs per establishment.
My own research published on this site found virtually no association between business incentives and any measure of economic performance, including wages, incomes, and unemployment. As I wrote here in 2012:

Companies typically select locations based on factors such as workforce, proximity to markets, and access to qualified suppliers, and then pit jurisdictions against one another to extract tax benefits and other incentives.

A 2011 Lincoln Institute of Land Policy study found property tax incentives to be counterproductive, being all too frequently given to companies that would have chosen the same location anyway. So instead of creating new jobs or spurring employment, the main effect of incentives is simply to deplete a community's tax base. Since poorer states and communities are more likely to use incentives in the first place, the end result is to undermine the resources and revenues of the places that can least afford it.

There are other reform idea's:

New Republic: There are better ways to jump-start local economies. Aaron K. Chatterji of Duke’s Fuqua School of Business has proposed creating a Main Street Fund to support states that invest in choices that are smarter than incentives. Those could be seed money for startups, services to help businesses scale up, or a focus on attracting particular kinds of businesses, as Amy Liu of the Brookings Institution has suggested. But first, cities and states would have to cease offering big bucks to big business.

The Hill: State officials, who pledged big subsidies to Foxconn to land the project, are realizing they struck a bad bargain. The bitter irony is that the entire situation might have been avoided if Wisconsin policymakers had paid heed to sensible constraints embedded in the state constitution's "gift clause," which says that, with some exceptions, "the credit of the state shall never be given, or loaned, in aid of any individual, association or corporation." The state can "contract public debt and pledges to the payment" of its credit for "public purposes." Most states have similar gift clauses, passed to ... restrict the type of public-private partnerships that lead to the government risking money for the private benefit of a corporation.

History Repeats itself...or, living in the past (moving forward?):

Many states added gift clauses to their constitutions in the mid-to-late 19th century. The impetus for these clauses stemmed from the states' bad experiences in using their resources to promote private economic development. In the early 19th century, many state governments began borrowing funds, supplying working capital or issuing bonds in support of transportation corporations. This led to a rat race between state governments, as officials competed to make bigger and bigger promises to companies to lure business to their states.

As Rutgers University professor G. Alan Tarr has described it: "Particularly influential in promoting the states' often-reckless promotional efforts were the hope of economic windfalls ... as other states courted prosperity with speculative ventures." Predictably, the bidding war, using public resources, led to ruin. In 1837, nine states defaulted on their debts, leading officials to question their methods of promoting economic development. As a result, many states adopted gift clauses to prevent the problems associated with promising state resources to private companies. One of those states was Wisconsin, which included its gift clause in the original 1848 constitution.

Unfortunately, since 1848, Wisconsin's gift clause has been weakened. It was amended to allow gifts or loans for "public purposes." Wisconsin courts have interpreted "public purpose" broadly, deferring to the legislature's determination of what is or is not a public purpose. The result is a clause that has no meaning and provides no limits on public spending.