UPDATE-March 17, 2019: Shocker, it looks like Scott Walker and the Republicans did kind of expand Medicaid, but just didn't take the federal money...our money by the way:


Former Gov. Scott Walker and the Republican-controlled legislature already expanded the Medicaid program. They just didn’t take the federal money available to states to offset much of the cost.

Wisconsin is the only state in the country that expanded eligibility for its Medicaid program — the change made in 2014 covered 147,000 adults without dependent children as of January — while not accepting the federal money available to states through the Affordable Care Act.

That decision will have cost the state an estimated $1.1 billion in federal dollars through the current fiscal year, according to the Legislative Fiscal Bureau.

Walker didn't think the federal government would be good on their word about paying 90 percent of the cost, odd since they've always paid their portion before that. Walker may be under the ridiculous and wrong impression the yearly federal changes to the percentage in the rules was the federal government going back on their payments. Walker is not a smart man.

But wait, there's more, and proof the report was a phony:


There’s also a question about the study’s time frame. The study ended with data from 2014 — before any purported cost shift to private health plans could have occurred in most states.

The expanded eligibility for Medicaid programs under the Affordable Care Act didn’t begin until Jan. 1, 2014.

Insurers typically negotiate three- to five-year contracts with health systems and other providers ... the price increases would not have been set until the following year, 2015.

Insurers and employers who self insure, in turn, set premiums for their health plans for the following year in September or October.

This means that any costs shifted to private insurers wouldn’t have appeared in the cost of health plans until 2016 at the earliest.

Insurer Profits over Medicaid Expansion: It sounds like a cliche, but seriously, Republicans only care about insurance company profits, as pointed out in the video clip below. Forget about giving every American the right to health care. Profits first, said Republican Sen. Aberta Darling, who wants to keep the poor in the private-for-profit insurance system. From UpFront:


Darling: "And if we say, okay we're going to take you off that insurance and put you on government insurance, we're really going to change the private marketplace and shift a lot of the Medicaid expenses to the private insurers like you and me."

Meaning our private insurance rates will go up! Not quite, as I described later below.

Oh by the way, and it "gets a little wonky," Darling apparently hasn't even bothered to get the facts right...it's not 33 percent...

The Affordable Care Act (ACA) expanded eligibility to all individuals earning less than 138 percent of the federal poverty level.

Watch out, Republicans will Cost Taxpayers More...the conservative Wisconsin Institute for Law and Liberty (WILL) missed this...:

States that don’t expand Medicaid are going to be in an increasingly tight spot, especially as the federal Disproportionate Share Hospital payments are reduced and phased out (because Medicaid expansion was intended to be universal, so there wasn’t supposed to be much uncompensated care to offset with DSH payments).

Duffy-Dumbing-Down: I had to include the following mindless rant from Rep. Sean Duffy on Fox News the other day.


Duffy: "This Medicare-for-All is Medicare for none. What happens is if you have your health care plan through your union, you're a welder, your a teacher and you have your health care plan through your teacher plan, GONE...there is zero private insurance. So if you have Medicaid in your state, in Wisconsin we have BadgerCare, it would be a watered down BadgerCare. So instead of shooting for the stars and have a better plan for people, improving the plans in the coverage, they go to the lowest common denominator. And they're crappy plans, for everybody, but they're all the same.

Don't laugh, voters were dazzled by this numb nuts, and just reelected him. Duffy switched from Medicaid-for-All to...Medicaid, like these programs are interchangeable. Duffy claimed  "private insurance" (with its hefty premiums, copays, and deductibles) is much better than no premiums, copays, or deductibles? Oh, and with Medicare-for-All you still get to keep your doctor, forever, even if you get a different job. No networks to stay in, no surprise bills to pay. Crappy plans for everyone indeed.

Desperately Trying to Kill Medicaid Expansion: A laughably inaccurate "study" by the conservative Wisconsin Institute for Law and Liberty (WILL) on Medicaid expansion was pure propaganda, aimed directly at right wing resentment and victim-hood, claiming that those paying for insurance right now will end up paying higher premiums, most likely from additional fees.


The Trump administration has now increased the flexibility for states to add elements in their expansion programs that will help to better control costs going forward. 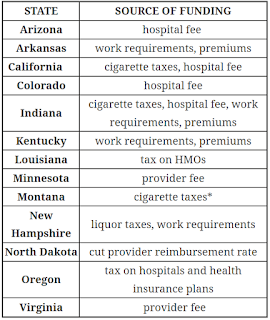 
Contrary evidence from opponents suggesting official regret comes from expansions that occurred prior to the ACA, when the states bore a much greater share of expansion costs.

A September Wisconsin LFB report showed taking full Medicaid expansion beginning in 2020 would give the state an additional $280 million to work with over the next two-year budget cycle. Wisconsin has missed out on $1.1 billion in federal money since 2014, according to the nonpartisan Legislative Fiscal Bureau. The state would save about $513 million over the course of the next two-year budget, which runs from July through June 2021, if it accepted federal money for full Medicaid expansion, the Fiscal Bureau said.

I found these additional facts that should put an end to this nonsense:

This Brookings Issue Brief reviews (the) evidence, and evaluates continuing claims by Medicaid opponents that expansion is a “proven disaster” for state budgets. The strong balance of objective evidence indicates that actual costs to states so far ... are negligible or minor, and that states across the political spectrum do not regret their decisions to expand Medicaid.

1. Claims that the costs of Medicaid expansion have far exceeded expectations are overstated, misleading, and substantially inaccurate, based on a review of the credible evidence from either academic or government sources.

2. Expanded Medicaid pays for various costs that states previously were absorbing outside of Medicaid. Accordingly, several credible and expert evaluations (including one in the New England Journal of Medicine) show that states such as Arkansas, Indiana, Kentucky, Louisiana, Michigan, Montana, New Mexico, Ohio, and West Virginia (among others) have actually reduced, not increased, state spending as a result of expansion.

3. Contradicting the ultra-conservative Foundation for Government Accountability claim that “each and every state that opted into ObamaCare expansion is facing a surge in Medicaid enrollment far higher than ever anticipated,” officials or agencies from Indiana, North Dakota, and Ohio (here and here) have flatly stated (and documented) that expansion enrollment, or overall enrollment, has either fallen short of, or not substantially exceeded, expectations.

4. the federal government now estimates that per person costs for newly eligible recipients will decrease almost 20 percent from their 2015 payment levels. Newly expanding states will be able to contract based on this more solid actuarial data, and can learn from the contracting techniques piloted by other states.