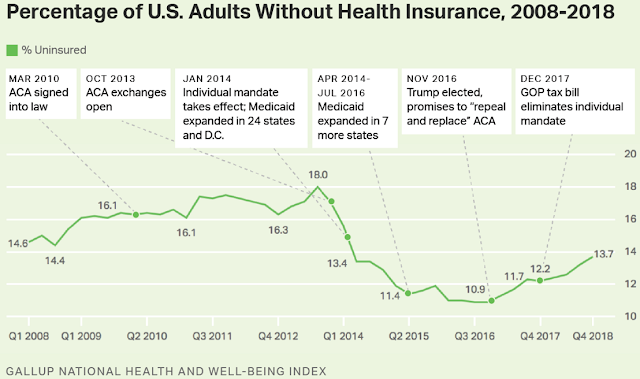 Surprise Medical Bills...Finally, someone Noticed??? This has cost me plenty in the past, so we're finally dealing with this problem. NOTE: This would not be a problem under Medicare-for-all or any other universal health insurance program:

The biggest debate will be what policy solution they settle on to fix surprise bills. Most legislators agree that they want to help patients who end up seeing an out-of-network provider at an in-network facility (and get a surprise bill from that out-of-network provider as a result). Those I've spoken with agree: This is a billing dispute between an insurer and a doctor or hospital. Patients shouldn't be caught in the middle.

Association Health Plan Con Game: This is the first time I've heard a judge call out con-man Trump for trying to get around the law. NOTE: This again would not be a problem with Medicare-for-all

2. Department of Labor deploys a "magic trick" in the way it defines employers and employees to make it fit within Employee Retirement Security Income Act (ERISA) requirements, (giving) owners with no employees ... "both hats," (both owner and employee) as it were. He said the definition borders on "absurdity." "DOL’s explanation is pure legerdemain," Bates ruled.

3. The expansion of association health plans, as critics argue, are plans that amount to "junk" coverage because they're not required to meet ACA coverage standards and lack consumer protections.

Medicaid Work Requirments Blocked, Designed to get People Jobs: This was a no brainer, yet it did have to go through the legal process. The fact that Kentucky created this program without any research, and then experimented on their citizens without ever tracking how the program affected recipients or on those that lost coverage should tell you a lot about Republicans. NOTE: This would not be a problem with Medicare-for-all or some other national universal plan:


In twin rulings, District Court Judge James E. Boasberg rejected for a second time Kentucky’s attempt to require recipients to work or volunteer as a condition of coverage and blocked a similar rule in Arkansas, which has resulted in more than 18,000 people there losing coverage since last summer ... it had not adequately considered whether it “would, in fact, help the state furnish medical assistance to its citizens, a central objective of Medicaid.”

The Trump administration had asserted that some people in Kentucky who lost Medicaid would gain commercial insurance coverage. But Judge Boasberg appeared skeptical, writing that federal officials “cited no research or evidence that this would happen.”