Walker lost hands down. That's how extreme and politically motivated career politician Scott Walker really is. It has now taken a Circuit Court Judge to call Walker's act of narcissism to keep his 8 year record in place unconstitutional. 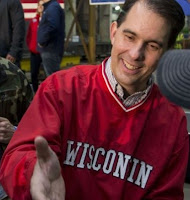 One other thing. The state Constitution does not allow the legislature to call its own lame duck extraordinary session, and yet, Republicans insist they are the strict constructionist, defending the exact words of the Constitution. There defense? They've been doing it for years:


Dane County judge Richard Niess on Thursday issued a temporary injunction blocking a set of laws passed by Republican lawmakers late last year that stripped away some powers from Wisconsin's governor and attorney general ... the method by which the Legislature passed the bills — an extraordinary session — is unconstitutional, therefore rendering anything passed during the session invalid. "Failing to enjoin the illegal actions of the Legislature would result in substantial changes to Wisconsin government, the administration of federal benefits and programs, election administration and transportation projects — all pursuant to laws that do not exist," wrote Dane County Circuit Judge Richard Niess in his ruling.

Lawyers for the Republican lawmakers and argued that striking down the lame-duck laws would call into question the validity of any laws passed in a similar manner over the last 40 years.

2. Walker violated the Separation of Powers! Yup, Power Corrupts: The Republican constitutional scholars who claim to know what the founding fathers intended, and whined for years how Obama exceeded his presidential powers, trashed any credibility they thought they had to argue their case permanently:

Dane County Judge Frank Remington has ruled in favor of plaintiffs and against GOP lawmakers’ lame-duck legislative session for the second time in two weeks ... The lawsuit, which was heard in court on Monday, argued lawmakers violated the state constitution’s separation of powers guarantee by unfairly limiting the authority of the executive branch. Remington agreed on several counts, blocking some — but not all — of the laws passed during the lame-duck session.

"Wisconsin’s constitution is like a keel on a great ship. It defines the structure of state government," Remington wrote in his decision. "In December, 2018 the Legislature and then Gov. Scott Walker upended the balance that this state has had for most all of its 171 years. The time has come to right this ship-of-state so Wisconsin can resume smooth sailing ahead."

Remington upheld lawmakers' ability to block Evers from changing require able-bodied, childless adults to work or pass drug tests in order to receive public benefits like food stamps and Medicaid, but threw out their authority to block his action regarding withdrawal from federal lawsuits.