I'd like to send out a challenge to most gun supporting conservative voters; make sense of and explain what the following ideas mean when arguing against any attempt to reasonably regulate guns.


1. John Lott, a controversial researcher whose book “More Guns, Less Crime” downplayed the role of federally funded research ... “It’s important that we don’t waste valuable resources on studies that don’t add anything to our knowledge,” he said.

Avoid "quick fixes and simple solutions" that would saves lives now, because it would just create political anger and division? You can't make this up...:


2. The subcommittee’s ranking member Republican Rep. Tom Cole's open(ed) with a paean to “true freedom from despotism,” which he implied could only be achieved through gun ownership. And he appeared to refer to federal investigation of gun violence of the kind Democrats support as “quick fixes and simple solutions” that would only worsen political divisions.

Still, Gun Regulation isn't perfect, so lets change...Human Nature First?: That means waiting for these gun toting neanderthals like Cole and Lott to evolve. Still, "broader and more inclusive" does not include quick fixes like background checks and banning high velocity weapons:


3. “More funding for the Center for Disease Control and Prevention will not, by itself, solve our systemic problems. Our response must be broader and more inclusive,” Cole said.


4. To that end, he stressed the importance of mental health funding. Supporters of gun rights often argue that psychiatric maladies, not guns, are at fault for gun violence. Statistics, however, indicate that the only factor that correlates with America’s extraordinary incidence of mass shootings is the rate of gun ownership. Other countries with similar rates of mental illness have many fewer mass-shooting events.


The new study on mass shootings, in particular, seems to call into question whether guns do make people safer. That does not appear to be the case on the whole, according to the study, “State gun laws, gun ownership, and mass shootings in the US: cross sectional time series,” published in the British Medical Journal and authored by researchers from Columbia University, New York University and other institutions.

Gun rights advocates have long held that mass shootings could only be prevented by the proverbial “good guy with a gun.” But the new study finds that, in fact...

2. The worst shooting in American history — the murder of 58 people at a country music concert in Las Vegas — took place in a state, Nevada, with a notorious lack of restrictions on gun ownership. The second-deadliest shooting — that claimed the lives of 49 at a nightclub in Orlando — happened in another state, Florida, known for its gun-related permissiveness. 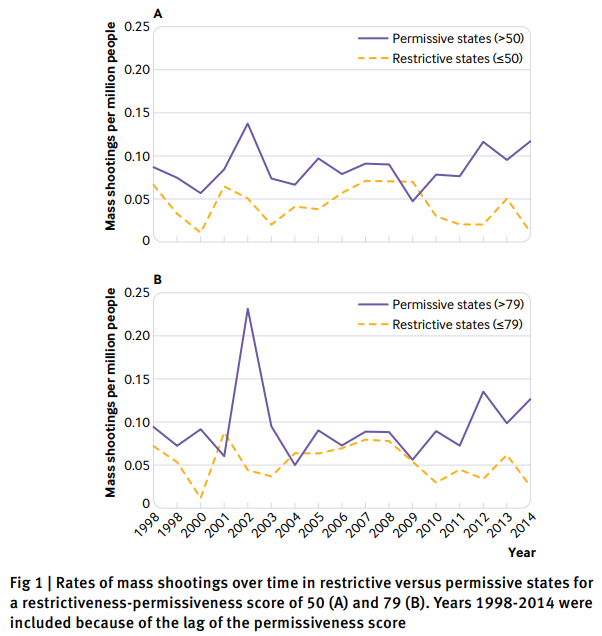