The Job creation mill that is the Republican Party. Can't they get a Real Job?

For a party claiming to hate government, it seems like everything they ends up latching onto government politicians, sharing power.

Hell, I've noticed this for years. The no-talent conservative radio talkers I heard didn't have to know much, they just had to be Republican, it was that easy.

But lately? Wow, it's insane how many freeloader like jobs are suddenly created by former cronies.

Former Walker cronies gave Scottie a big money funded political influence peddling job, so he doesn't have to work. Hey, how about a cruise...: 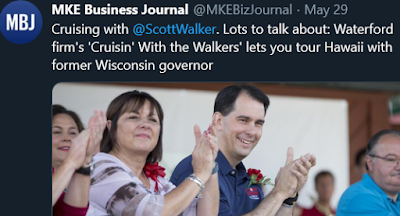 The Job creating Lawsuit mill Wisconsin Institute for Law and Liberty latches onto Republican Party Money: I posted this recently:

WILL's Conservative Lobbyists-the Final Corruption of our Legal System: Adding to the public's dislike and skepticism of the their own government, WILL is providing that final nail in the coffin of this great experiment:


Cap Times: For the first time in WILL’s existence, four of its employees registered earlier this year with the state’s ethics commission to lobby in the state Capitol.

Just a Game: Love the "high-caliber attorneys" playing to win:

WILL executive vice president CJ Szafir said “What we’re trying to do is put together a team, maybe like the Golden State Warriors of the conservative movement, which is filled with high-caliber attorneys, communicators and policy analysts that are going to fight for (our) principles.”

Conservative lawyer Rick Esenberg ... saw a need ... and With the help of a $500,000 grant from the Lynde and Harry Bradley Foundation, WILL launched as a law firm ... The organization now includes 18 attorneys, researchers, writers and other staff, plus two contracted advisers. Its revenues peaked in 2015, at $3 million.

WILL ... plans to double size of the organization in the next five years. “In order to do that, we need to reach out to high-wealth individuals, business executives and ideologically motivated people who share our beliefs and values, to talk about the program and what we’re trying to do,” said Jim Pugh, who joined WILL as vice president of development.


Kevin Nicholson creates Political Job for Himself, latches onto Government Power Leaders: Nicholson failed in his primary bid to take on Sen. Tammy Baldwin, so this is a logical next step. Don't laugh, this is sadly real:

Nicholson has spent the last few months speaking at Republican caucuses and Lincoln-Reagan Day dinners and appeared at the recent state GOP convention.

Now, he's forming a nonprofit organization, "No Better Friend Corp." a 501(c)4 advocacy group to promote conservative public policy solutions. "On a personal level, I'll do what I can to help the president win re-election 2020."