I'm a little surprised no one else noticed this obvious use of race-baiting, a ploy I'm usually slow to pick up on. With terms like "push drug use" and "ripped families apart," I got the message.

Let's start with the premise that race-baiting, using racially-inflammatory issues or stereotypes, preys on the fears of black men’s supposed inherent criminality. Like using marijuana.

That's just what happened when Republican Representatives Robin Vos and Jim Steineke shamelessly went after a comment by Wisconsin's first black Lt. Governor Mandela Barnes. It was no accident. 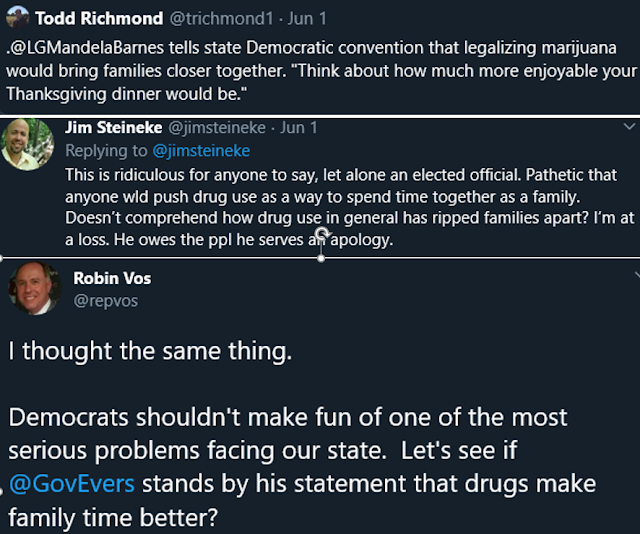 Of course the only problem with pot is that people are still getting arrested for using it, which Vos and Steineke are okay with. Their position flies in the face of what Wisconsinites want, big time:

Like the GOP fear of hemp, despite Canada and US states legalizing recreational marijuana, they still see this;

Next Up, Republicans Limit Lt. Governor's increased Security! Well, we know why...because both our white governor and Lt. governor had so much to worry about:

Security trimmed for a top Democrat: Their plan would prevent the State Patrol from spending more to protect Barnes than it did at the end of GOP Lt. Gov. Rebecca Kleefisch's term ... Barnes had nine times as many hours of security in two months as Kleefisch did in her last year in office.

Democrats criticized the limits on security for Wisconsin's first black lieutenant governor. Former Barnes aide Brandon Weathersby said it was not unusual to get hateful messages to Barnes' office when he was in the Assembly. "This is petty," Weathersby wrote on Twitter. "This is dangerous. This is wrong."

Hate crimes spiked 17 percent last year, and the GOP is unconcerned with the safety & security of the state’s first black Lt. Gov. This messed up beyond belief. 1/3

You think THIS might have something to do with it too... 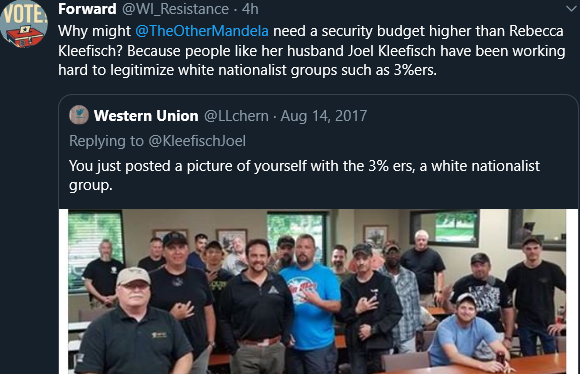 The paranoia that runs deep in the Republican Party were amplified by Scott Walker and Rebecca Kleefisch, which was one reason Walker's book, "Unintimidated," was so ironically funny...

"Walker described the reasons he increased security in his book, 'Unintimidated.'”

Ya gotta laugh! Perhaps we should have insisted Walker spend as much on security as former Gov. Doyle? Here are a few of the old headlines that shocked fleeced taxpayers:

Taxpayers spent $2.23 million on security, including salary, benefits, out-of-state lodging and other expenses, in 2013, according to Walker’s office. That’s up from $657,457 in 2010, the last year Gov. Jim Doyle was in office. Total security spending has increased 41 percent since 2011, from $1.58 million to $2.23 million. Doyle had four primary agents provide security, whereas Walker had 10 primary agents starting in March 2011.

Senate Minority Leader Chris Larson called the increase in security spending “jaw-dropping” and said Walker’s campaign should reimburse the state for the increase over previous governors.