GOP makes Wisconsin a Throwback Island in a sea of Midwest States.

As long as Wisconsin is locked into GOP gerrymandered control, our state keeps falling further and further behind. We're trying to get people to come and work here while keeping the federal minimum wage of $7.25 an hour? Good luck. 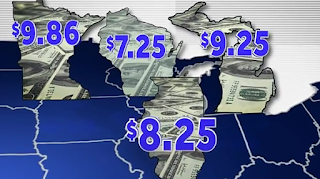 Wisconsin is lagging behind most of its Midwest neighbors in attracting highly educated workers.

Plus this story just happened, taking out of the mix even more job creation: 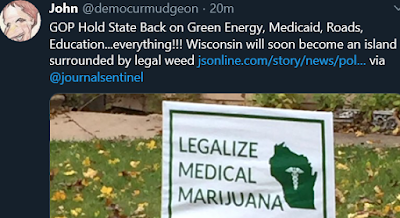 Three out of the four states that border Wisconsin — Illinois, Michigan and Minnesota — have now legalized marijuana use and two of them allow residents to purchase and consume cannabis for any reason.

While more and more state legislatures are embracing legal marijuana for medical or recreational reasons — 33 in all — Wisconsin isn't likely to anytime soon.

Pot is causing problems in other States? Yeah, I guess,...

All 33 states have apparently rushed blindly ahead of Wisconsin, who finally approved agricultural hemp?

It was no accident that Tony Evers became governor. The public is ready for progress no matter how many suck-ups stroke the egos of our gerrymandered Republican "winners" in their districts.

62% of statewide voters prefer the elimination of minimum markup while raising the gas tax by 8 cents per gallon.

62% of voters agree with increasing the gas tax and eliminating minimum markup.

69% of voters believe the minimum markup law should be eliminated.


65% of voters believe Republican leaders should work with Gov. Evers.

60% of voters agree with increasing the gas tax and eliminating the minimum markup.

75% of voters believe the Gov/Legislature should act on a long-term solution for roads.

61% of voters believe the minimum markup law should be eliminated.