Okay, I hitching my wagon to either Mayor Pete Buttigieg or Elizabeth Warren for president. For right now, it's Buttigieg (boot-ti-geej).

Before I get to the following clips of Mayor Pete, we can't forget that Trump voters out there that still have a whole difference reference point in their reality. Devoid of punctuation, this rambling list of excuses inoculates Trump from everything. As Spock would say, "it's not logical": 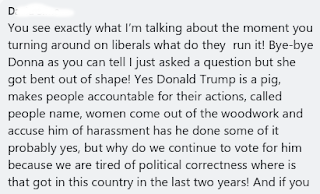 Back to reality, this is 37 year old combat veteran Mayor Pete, a graduated from Harvard College and, on a Rhodes Scholarship, went to Pembroke College in Oxford.

The rip on "free college" is that it also helps pay for the children of wealthy parents. He has an answer to that the minimum wage:

For a more complete picture, here's Mayor Pete explaining things on Morning Joe. I cut all the hosts comments because I didn't want the network to block Buttigieg's answers. CNN and Fox News allow public use of their segments, not MSNBC.

And on the Christian right, claiming they're following the bible and pro-life, all the while locking children up in cages: