Hey Reporters, Medicaid is NOT a Welfare Program!!!

Just to be clear, Medicaid is NOT a welfare program. It's a federal insurance program.

Would you call the money an insurance company pays out to you for a car accident or damage to your home...welfare? Medicaid is a federal insurance program.

For decades, Democrats protected the federal Medicaid insurance program from making changes that mirrored a typical welfare program. That ended with Trump and Scott Walker. Just by adding a work requirement, they believe they have turned Medicaid into a "welfare" program. It's magic.

Is it pro-life to deny people health care? No. Do our lives have value if we're not working? No.

Incredibly, Republican Rep. John Nygren isn't even afraid to boldly admit to replacing the word "Medicaid" when talking to constituents with...are you ready..."welfare!" Surprise, constituents were against expanding welfare. It's a push polling trick Republicans aren't even trying to hide anymore.


Nygren: "He (Evers) often times touts polls, right, the Marquette Poll, 70 percent. Actually, Assembly Republicans actually asked all of our constituents the same question, but we asked it a little differently, we asked them about expanding welfare. You know, I mean, some people cringe at that but Medicaid was designed as a welfare program for the impoverished...so we asked that question, the overwhelming results were 80 percent were against expansion."

But replacing "Medicaid" with "welfare" wasn't they only trick. Nygren is also not telling constituents about research that contradicts the effects of expanding Medicaid...or as he likes to call it, "welfare:"


In May, the Kaiser Family Foundation published a review of 202 studies of Medicaid expansion, and found it had “positive or neutral” effects on work:

2. In Ohio, Medicaid expansion was found to be beneficial to those who were unemployed and looking for work.

Say Medicaid is Welfare, Repeat: Below snarky wise-ass Rep. Robin Vos couldn't stop driving the "welfare" point home. Well then, it must be true. Tip to reporters, don't let them get away with it, ever. And don't repeat it for them:

Throwback Republican Ideas: There's no question our economy has dramatically change from the 50's, but Republicans want us to continue using a social and economic philosophy, or platform, a half century old. The cartoon below reflects mid century thinking that oddly hasn't changed a bit: 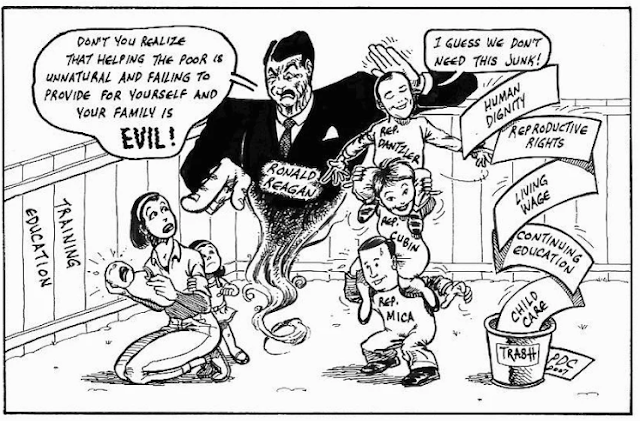 Let's take a look at frail seniors who no longer have the ability to pay their health care bills:


Medicaid is the largest insurer of long-term care, also known as Long-Term Services and Supports (LTSS). Medicaid coverage for the elderly and disabled comprises a greater percentage of overall spending than coverage for low-income adults and children. 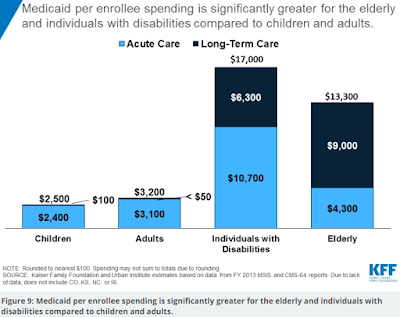 Severing the link between Medicaid eligibility and welfare in 1996 and enacting the Children’s Health Insurance Program (CHIP) in 1997 to cover low-income children above the cut-off for Medicaid.

Medicaid is not Welfare, point by point:


1. Medicaid is the nation’s public health insurance program for people with low income, health and long-term care for millions of America’s poorest and most vulnerable people, acting as a high risk pool for the private insurance market;

2. Principal source of long-term care coverage for Americans in the home or community that enable seniors and people with disabilities to live independently rather than in institutions.

3. 48% of children with special health care needs and 45% of nonelderly adults with disabilities (such as physical disabilities, developmental disabilities such as autism, traumatic brain injury, serious mental illness, and Alzheimer’s disease);

4. And more than six in ten nursing home residents;

6. Help pay for premiums and cost-sharing for low-income Medicare beneficiaries and allowed states to offer an option to “buy-in” to Medicaid for working individuals with disabilities;

7. Severing the link between Medicaid eligibility and welfare in 1996 and enacting the Children’s Health Insurance Program (CHIP) in 1997 to cover low-income children above the cut-off for Medicaid.

And when GOP treats Medicaid insurance like a welfare program, a maze of regulations and requirement are created to knock people off the program:

The study, based on a phone survey of about 6,000 people late last year and published in the New England Journal of Medicine on Wednesday, cast doubt on the effectiveness of the CMS-approved Arkansas demonstration to get more non-disabled Medicaid enrollees into health-enhancing jobs, training or volunteer activities. Nine Republican-led states have gotten similar waivers.

"We didn't find any employment changes and instead we see Medicaid coverage rates dropping and more people without health insurance," said Dr. Benjamin Sommers, a Harvard University health policy professor who is lead author of the study. "Based on our results so far in Arkansas, it doesn't appear that this particular policy is accomplishing its goals."

By the end of December, Arkansas had disenrolled more than 18,000 people for noncompliance. In March, a federal judge halted the work requirement programs in Arkansas and Kentucky, ruling that the HHS secretary did not adequately consider the impact of the waivers on providing coverage, which is one of Medicaid's central objectives. The same judge is set to rule on New Hampshire's work requirement waiver.

But J.R. Davis, a spokesman for Arkansas Gov. Asa Hutchinson, said nearly 15,000 Medicaid expansion beneficiaries found jobs from June 2018 through April 2019, though the state doesn't know how many are the same people who lost coverage due to non-compliance with the work requirement.