Wisconsin Republicans want to eliminate all of Wisconsin’s state air pollution regulations! They really do!!!

Seriously, I nearly spit out my coffee this morning when I heard the WPR headline below...

Under the proposal, the state Department of Natural Resources would have the option to reintroduce those regulations.

Optional? What's the big deal? One of the Senates most backward and clueless Republican legislators ever, Sen. Duey Stroebel, said this in the most nonchalant way...


"All we're asking is that our scientists at the DNR just take a look at all the things that they regulate above and beyond the EPA, and make sure that it still makes sense," said Sen. Duey Stroebel, R-Saukville, one of the bill’s sponsors. "If it does, we'll regulate it. If it doesn't, based upon what the scientists say, we won't." Wisconsin Manufacturers and Commerce and the American Petroleum Institute support the bill.

So what's not to like? Yup, it'll be just that easy to reinstate a regulation if our anti-science Republican legislature and depleted DNR staff think we've made a balanced decision weighing the unfair cost to business against the remotely possible environmental benefits. What's the beef?

At least we'll always have the EPA standards as a backup...?

Republicans Roll Back Environmental Protections in Wisconsin at the same time EPA Rolling Back Everything Else: Just by coincidence, this coal industry story hit the fan:

The Trump administration is rolling back regulations on coal-fired power plants.

A memo written by Robert E. Murray, a longtime Trump supporter who donated $300,000 to the president’s inauguration (and) the head of Murray Energy, presented Mr. Trump with a wish list of environmental rollbacks just weeks after the inauguration ... the White House has completed or are on track to fulfill most of the 14 detailed requests:

1. Ending regulations on greenhouse gas emissions and ozone and mine safety

2. Cutting the staff of the Environmental Protection Agency “at least in half.”

3. Overhauling the Labor Department’s office of mine safety. 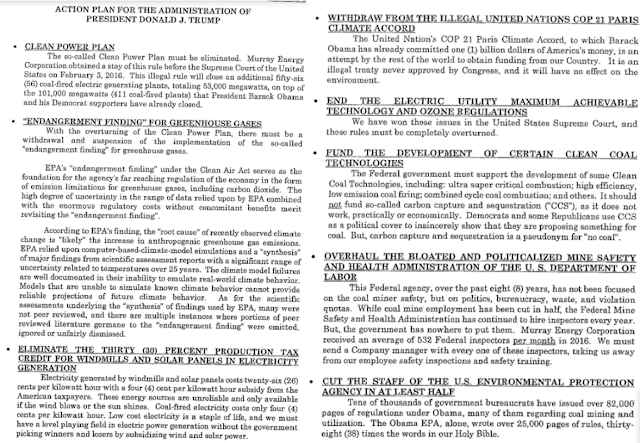 Republicans are in Charge, but not Control (of themselves): None of this is new, as you can see at this link where Paul Ryan has been passing this kind of environmental trash out of the House for years.
Posted by John Peterson, Democurmudgeon at 1/10/2018 11:58:00 AM