From a previous blog post, this event was a pelude to the growing teacher shortage:

Now anyone can teach our kids, says one rural republican politician. Underfunded rural schools, struggling desperately to keep their teachers from leaving, just got the conservative kind of help they voted for. jsonline:


A rural schools leader said that's not what rural schools asked for. "Heavens no," said Jerry Fiene, executive director of the Wisconsin Rural Schools Alliance. "This totally destroys any licensure requirements that we have in Wisconsin. It's very concerning."

New Low in Stupidity: May I introduce you to Rep. Mary Czaja (R-Irma). But she's not alone...her fellow dullards in the assembly love the idea:


She said pursued the (following) measure...


Anyone with a bachelor's degree could be hired and licensed to teach sixth- through 12th-grade English, math, social studies or science in Wisconsin And any person with relevant experience — even a high school dropout — could be licensed to teach in any other non-core academic subject in those grades.

Czaja agreed it might make it easier to become a teacher in Wisconsin than in any other state. Czaja couldn't name any districts that had asked for the broader flexibilities.


"The districts are going to be the ones that hire these people, and I firmly believe that they're not going to throw somebody in there that isn't doing a good job. This is just flexibilities. They don't have to use it."

Scott Walker's Act 10 "Emergency Licenses:" Doesn't sound right...right? Sure we've got a budget surplus, but it didn't have to come at the expense of teachers or public education. These dumbed down emergency licenses are on the increase too, with no sign of slowing down: 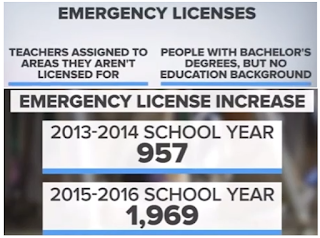 Alan Shoho, the Dean of the School of Education at the University of Wisconsin-Milwaukee, said the school's enrollment is down from historical numbers. He tells us jobs that once had 120 candidates before Act 10 now fall closer to 20. "We can talk about compensation, we can talk about working conditions, but I boil it down to this one word and its respect.". He feels the lack of respect has caused detrimental changes in teacher education.

Walker to the Rescue, Again, Fixing a Problem He Created? Here's what's worse; not only does Walker have to fix a problem he created, but like everything else, he's lowered the bar with a half-assed band-aid that's just as destructive. From WKOW a look at the teacher problem and the solution - make it easier to become a teacher?:


-Some teachers get a taste of today's workplace and leave education entirely … pressures and politics of the job have heightened in recent years … it's common to hear teachers say they feel disrespected by the public, unsupported by their administration and beaten up by parents.

-Act 10 has created an open market for teachers, which makes it harder for districts to retain staff with sought-after skills. "Everyone is talking about resignation rates, they're higher everywhere in the past several years," Johnna Noll, director of instructional services at the West Allis-West Milwaukee Public Schools said.

Walker: "Improving the Quality of the Classrooms is Priceless...:" Walker's worse than anticipated solution to hiring unqualified teachers is "improving quality?" That's what's he going to say in the state of the state address:

Walker also previewed a message he'll deliver on Wednesday, touting historic spending on K-12 education in his latest budget and the impact of his controversial 2011 Act 10 law that hobbled the ability of public teacher's unions to negotiate benefits, working conditions and wages.

"Making a historic investment in K-12 education is great, but knowing with certainty those dollars will be invested in improving the quality of the classroom is priceless," Walker said.