Let's get rid of the term, "creeping fascism." It's now just fascism, period. 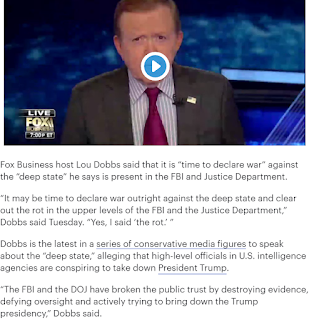 Creeping Authoritarianism - Purging "Deep State" Opposition: The point is, Republicans are drooling over the chance to put in place a one-party authority, despite the fact that the next election could stop them cold. But it does send up a few red flags.

Federal "Deep State" Opposition Purge: Since Trump was elected, Republicans have been racing to finally delegitimize and eliminate their political opposition, what they call the "deep state," along with anyone or any entity that disagrees with them:


President Trump blasted the F.B.I. on Twitter as a biased institution whose “reputation is in Tatters - worst in History!” He is casting the men and women of the Federal Bureau of Investigation as unreliable, if not worse, just as he has previously done with C.I.A. agents, federal judges, scientists, Congressional Budget Office analysts and journalists, among others. The president wants to undercut just about anybody who is an independent source of information.

Dumb Ron Johnson's alleges Secret Society: Getting whatever mileage they can using words and phrases out of context to smear critics, Dumb Ron Johnson dumped an Alex Jones like conspiracy theory today. Hey, it's all second-hand stuff, but Johnson claims "...I have heard, from somebody who has talked to our committee..."


One cool thing about The Trump Era is people feel they can just say anything, at any time, with no evidence, even when they have an abundantly clear political motive. Senator Ron Johnson, Republican of Wisconsin, embarked on a tale of conspiracy and woe, as he recounted how a "secret society" within the FBI and the Justice Department was meeting "off-site"—secretly—as part of a campaign to undermine President Trump.

Wisconsin "Deep State" Opposition Purge: Republicans aren't very original, so it's not surprising to see their Borg-like machine replicate the "deep state" purge at a statewide level. Walker's "legal" lackey AG Brad Schimel started the attack with a factless partisan smear campaign against the old GAB staff, accidentally and illegally releasing information about another confidential investigation. And then it snowballed from there, as planned:


(Schimel) issued a report finding the leak (to The Guardian) was a crime but that he did not have sufficient evidence to charge anyone. GOP leaders of the state Senate approved broadening an investigation into the activities of a state ethics board that they disbanded because they believed it was biased against Republicans ... Rep. Robin Vos said, “The idea that individuals who potentially are on the short list of having committed a crime are now going to be in charge of running ethics and elections seems preposterous to me.”

That led to the Wisconsin purging, a "cleaning up" based on Schimel's smear report:


Republicans in the Wisconsin state Senate have voted to fire the state's top ethics and elections administrators because of their connections to the now-defunct Government Accountability Board and its investigation of Gov. Scott Walker. "I think we have to," said Sen. Majority Leader Scott Fitzgerald, R-Juneau. "I'll never have any confidence in either one of those agencies until that's cleaned up."

Who else will be included GOP enemies list, besides Wisconsin protesters, DNR scientists, UW faculty, election officials, anyone from Madison and Dane County, liberals, local governments, and teachers?
Posted by John Peterson, Democurmudgeon at 1/24/2018 12:01:00 PM