There's a reason why I call him, Dumb Ron Johnson. This is just another example.


The fantasy was that Medicaid expansion is to blame for the opioid crisis in the United States. The ringmaster was Sen. Ron Johnson (R-Wis.). Johnson has been flogging this notion for the better part of a year, or longer, despite the utter lack of evidence that it’s true — and plenty of evidence that the opposite is true.

Just imagine if the U.S., or for that matter any other country in the world, had universal health care. The horror, where everyone is on opioids!!! Oh, other countries have universal care and they don't have the same problem as the U.S? That's our Dumb Ron Johnson.

From NPR, I caught this audio clip of Johnson's embarrassing freak out:

Johnson even put out a Homeland Security report listing coincidences and pure mumbo-jumbo all on official paper shown above with link.

Michael Hiltzik of the Los Angeles Times had a field day with Johnson's lunacy, with graphs and facts. Maybe Hiltzik should be in charge of Homeland Security:

The witnesses included one anti-Medicaid ideologue, two local prosecutors who testified that they’ve seen a lot of addicts in their work and lots of them seem to be on Medicaid, and two experts who, tactlessly, pointed out that the causes of the opioid epidemic are many and complex, that it started years before Medicaid expansion, and that it involves patients and doctors in Medicare and private insurance as well as the uninsured. As Andrew Kolodny of Brandeis University told Johnson’s committee, this was the product in part of the drug industry’s “brilliant, multifaceted marketing campaign that changed the culture of opioid prescribing.”

The Republican campaign against Medicaid could only make the opioid crisis worse. That’s because Medicaid pays for a huge proportion of opioid treatments, covering fully one-third of those with addiction problems.

Here are the charts... 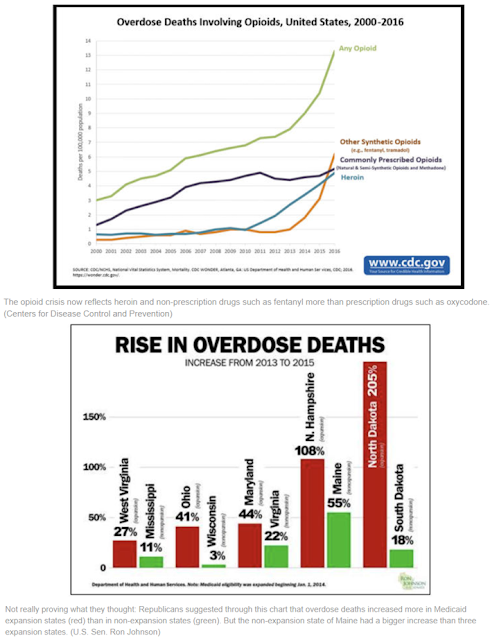