Wisconsin's Walker and Ryan can't be bothered with Sexual Assault....

Inaction by Republicans and Paul Ryan, not to mention a sleepy-eyed shrug from Scott Walker, will forever brand these guys as family values failures, and an "anything for power" political monster.


Morning Edition's Steve Inskeep asked Ryan about the differences between the allegations against Moore — which the House speaker reiterated he believed were "very, very credible" — and the accusations against Trump.

The speaker said he was "focused on Congress" because that's where Moore wants to go. "My job here as speaker of the House is to help make sure that Congress is an institution that we're proud of and that's what I'm focused on," he said. Asked again about the differences, Ryan said, "I haven't spent my time reviewing the difference in these two cases."

Scott Walker was asked about Trump and, well, the answer is pretty much another empty GOP talking point; it's over, we had an election...but he still takes it very seriously: 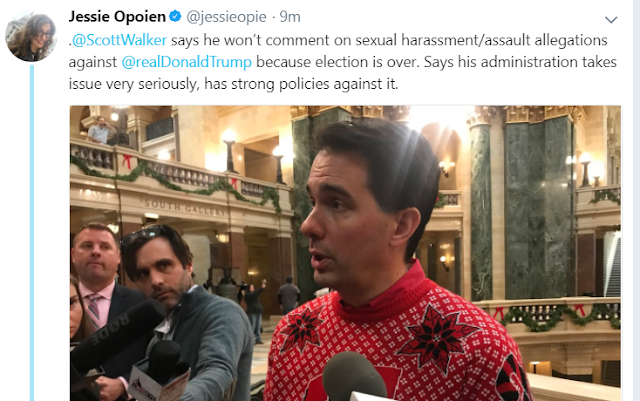