It may sound cliched, but Republicans have a national plan to destroy public education while shoveling lots of tax-free money to the wealthy. It's a two-step con game that steals money from all public schools and colleges while penalizing Democratically populated higher tax states, those "playpens of the left:"


On the K-12 side, cuts that impact the source of public school funding are coming hand in hand with special tax benefits for families with means to put aside money for private school tuition.

On the higher education side, Stephen Moore, a conservative economist and adviser to the Trump campaign, told Bloomberg that Republicans are going after university endowments because "universities have become playpens of the left." A recent Pew poll showed 58 percent of Republicans say colleges have a negative effect on the country, while 72 percent of Democrats say they have a positive impact.

That's right, nearly 60% of Republicans blame colleges for our problems. And then they complain that liberals think they're stupid. Hey, if the dunce cap fits...it's not like we don't have proof: 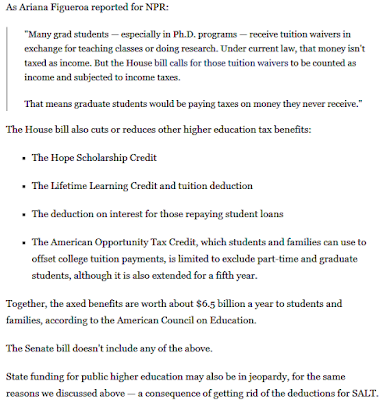 1. Taxpayers can currently save money for college through a 529 plan, where earnings grow tax-free. Republicans want to let taxpayers use 529s to pay for K-12 tuition at private and religious schools, too. Families can already do that; Coverdell Education Savings Accounts, but these have low contribution limits and aren't open to high-income Americans. "I think the only taxpayers who will be in a position to benefit from the 529 change are very rich people," says Nora Gordon, an economist.

2. Republicans are proposing another change that could hurt funding for the nation's public schools ... getting rid of the income and sales tax deductions ... "make it more painful for residents to increase local property taxes to pay for public schools." Nora Gordon of Georgetown said, "They're states with higher cost of living, higher property values, and states that spend more on their state and local government."

3. NOTE: According to a recent analysis from the Center on Budget and Policy Priorities, after adjusting for inflation, "twenty-nine states provided less overall state funding per student in the 2015 school year than in the 2008 school year, before the recession took hold."