My conservative, in-the-tank "Trumpian" friend in Milwaukee, isn't paying any attention to state politics. He's like many Wisconsin voters who have pretty much given up trying to understand what Republicans are doing based on the chaotic messaging put out by Scott Walker and Paul Ryan. 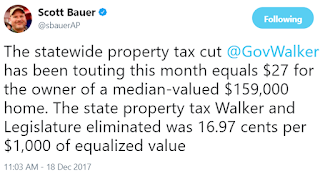 BUT: As you can see below, that savings is...well, nowhere to be found on my property tax bill. Like a lot of Wisconsinites, their bills may have increased, meaning the price of GOP loyalty comes pretty cheap:

It's a shell game pure and simple. There's no free lunch they say, but you'd never know that listening to Republican legislators and Scott Walker.  It's just another attempt to try and sell that free lunch in a new and improved shining tax cut package.

Walker is running again on failed supply side record, a campaign that fosters rural resentment, claiming the government is too big, which really means he's willing to squander a century's worth of public investments for a few dollars worth of tax cuts.

In 2019, large corporations and other businesses in Wisconsin would receive 46 cents out of every dollar delivered into the state by the federal GOP tax cut bill, according to a new analysis. $2.5 billion in 2019, or a bit less than the $2.8 billion delivered to individuals and families in the state. But because the bill's tax cuts for individuals are set to expire in 2025, the tax cuts for corporations would easily outweigh them by 2027.

In that year, individual taxpayers would pay $384 million more while large corporations in Wisconsin would still see a tax cut of just under $1 billion.

I think Sen. Tammy Baldwin nailed it for Wisconsin voters: