No One Read the Bill: Republicans "accidentally nullified all of their corporate donors' favorite deductions."

Seems like a really HUGE deal, right? Put another way... 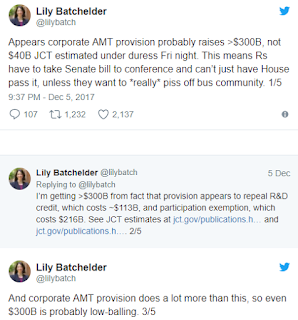 While Republicans were manically outlining their plans to take from the poor to give to the Trumps, they also, accidentally, nullified all of their corporate donors’ favorite deductions. The Senate bill brings the normal corporate rate down to 20 percent — while leaving the alternative minimum rate at … 20 percent. The legislation would still allow corporations to claim a wide variety of tax credits and deductions — it just renders all them completely worthless. Companies can either take no deductions, and pay a 20 percent rate — or take lots of deductions … and pay a 20 percent rate.

And you can thank Dumb Ron Johnson, who New York Magazine named specifically:


Last Thursday, the Senate tax bill already cost about that sum, and then McConnell started making expensive promises to his few holdouts. Susan Collins wanted a $10,000 property tax deduction for Americans in high-tax states; Ron Johnson wanted a 23 percent business-income deduction for the company that his family owns. This left the Senate Majority Leader searching under the tax code’s couch cushions for new sources of revenue.

Eventually, he came upon the corporate alternative minimum tax (AMT). The GOP had originally intended to abolish the AMT. But on Friday, with the clock running out — and money running short — Senate Republicans put the AMT back into their bill. Unfortunately for McConnell, they forgot to lower the AMT after doing so (AMT prevents companies from paying any less than 20 percent on their profits).

There's a reason Republicans don't like government; they can't manage their way out of a paper bag and they're ruled by anecdotes and wildly fanciful theories that have failed over and over.


As The Wall Street Journal reports: The biggest consequence could be the research credit, often used by manufacturers, technology firms and pharmaceutical companies ... Under the credit, companies get money back from the government for what they spend on innovation, often for wages of scientists and engineers.

I think the following comment sums up the GOP tax cut bill, and it's unintended consequences very well:


… Robert Murray, of Murray Energy Corp., an Ohio-based firm and the largest privately held U.S. coal-mining company, complained ... the Senate tax plan would raise his company’s tax bill by $60 million. “What the Senate did, in their befuddled mess, is drove me out of business and then bragged about the fact that they got some tax reform passed,” Mr. Murray said in an interview Sunday. “This is not job creation. This is not stimulating income. This is driving a whole sector of our community into nonexistence.”