This is weird. I had saved this odd Chuck Grassley comment from NPR but never found the inspiration to post it. Now I can.

Grassley lit up Twitter with his bizarre reason to repeal the estate tax... 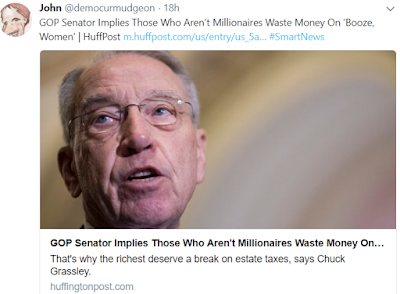 “I think not having the estate tax recognizes the people that are investing — as opposed to those that are just spending every darn penny they have, whether it’s on booze or women or movies,” Grassley told the Des Moines Register

That was surreal. Here's my audio clip of Grassley on NPR backing the investor class, and ripping those living paycheck to paycheck spending everything they have, you know, consumerism that boosts demand, the economy and creates jobs. That's investing in America to me. Investors who don't spend? Grassley wants to reward them:

Grassley: "...show appreciation for people who have lived frugally early in their life, delayed spending so they could save. Seems to me there ought to be some incentive and reward for those who work and save and invest in America, as opposed to those who live day-to-day. You could take the same $100,000 income for two people, one of them, they spend it, have it all spent by the end of the year, and the others have saved a fourth of it and invested and create jobs, and leave something for the future.

The first person leaves nothing for the future...I'm giving you a philosophical reason for recognizing savings, vs those who want to live high on the hog and not save anything and invest in the commodities."

Here Grassley can't think of any farmers who would have to pay an estate tax, but is the issue legitimate? Well, you'd have to ask the farmers...anecdotal proof: