The fact that Trump has not reacted to or tweeted anything about the white supremacist protests, but Melania did said it all...

CNN: Donald Trump's penchant for retweets once again raised eyebrows, after he recirculated a tweet on Friday from a user with the handle "WhiteGenocideTM."

The profile -- with about 2,300 followers -- used the name "Donald Trumpovitz," linked to a website containing a pro-Adolf Hitler documentary, featured a background photo with red lettering saying "Get the F--- Out of My Country" and had a location of "Jewmerica." The account also includes a photo of George Lincoln Rockwell, founder of the American Nazi Party.

Tom Tomorrow insightfully gave us this...

Voxdotcom put the following video together...


Unite the Right, the violent white supremacist rally in Charlottesville, explainedThe “alt-right” rally was a coming-out party for resurgent white nationalism in America.

Along with this brutal violence:

The innocent victim of the terrorist attack... 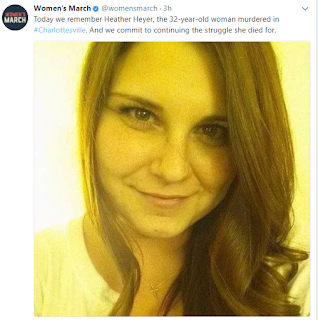 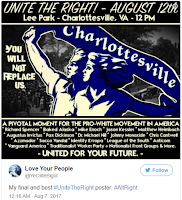 Self-described “pro-white” activist Jason Kessler organized the rally to protest the planned removal of a statue of Confederate General Robert E. Lee from a park in Charlottesville. Kessler is affiliated with the “alt-right” movement that uses internet trolling tactics to argue against diversity and “identity politics” — part of a broader cultural backlash that helped elect Donald Trump.

But the rally quickly attracted other more traditional groups of white nationalists, neo-Nazis, and the Ku Klux Klan.

The rise of the alt-right is one face of a broader backlash against “identity politics” and “political correctness,” which have left some white Americans feeling that they’re losing ground to nonwhites — or that America is losing its identity — and that political, economic, and media elites are either uninterested in defending their heritage or actively trying to eradicate it.

But racist rhetoric has become a hallmark of the movement, from the use of “cuck” to deride anti-alt-right conservatives to Twitter harassment of Jewish journalists by photoshopping them into images of Nazi gas chambers.

That crosses the line into ideologies that most Americans agree are taboo. People may believe that Donald Trump supporters aren’t necessarily racists, but they are willing to agree that members of the Klan and Nazis are racists. Indeed, it’s a contrast with those groups that allows some people to draw the line between “real racism” and liberals “crying wolf” about racism.

Who can forget the perfectly innocent, inside supremacist joke and Trump Nazi salute?

Or Trump's inability to criticize his white supremacist Nazi base...the fact he read his carefully crafted statement is a dead giveaway:

As Mother Jones magazine reported back in April....

The ultimate is Trump's new "many sides" do it meme, an intentional expansion on the idea that "both sides do it." 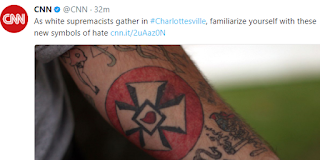 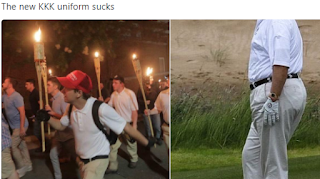 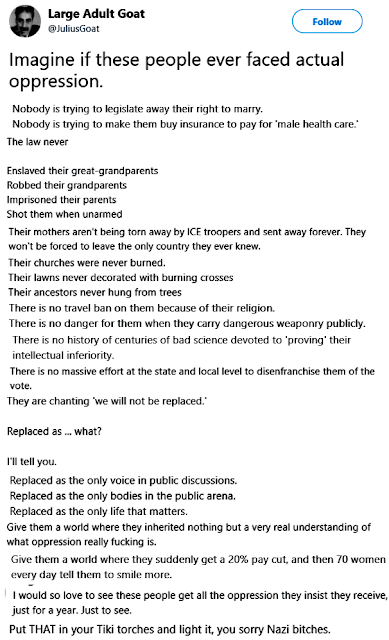