Taxpayer Dollars to Foxconn, a company that made $140.55 billion last year?

It's important to understand how Scott Walker and Paul Ryan are the biggest sops for "crony capitalism" ever, and how Wisconsin taxpayers will be unmercifully fleeced under the guise of their twisted vision of "free markets," bringing Foxconn to the state. Here's the definition, see if you recognize any part of it...:


Crony Capitalism: An economy that is nominally free-market, but allows for preferential regulation and other favorable government intervention based on personal relationships. In such a system, the false appearance of "pure" capitalism is publicly maintained to preserve the exclusive influence of well-connected individuals.

While we need companies like Foxconn to set up shop in Wisconsin, we can't lose sight of how big Foxconn is. We're going to give billions of hard earned taxpayer dollars to Foxconn, after they made $140 billion last year??? Seriously, and they have the nerve to ask??? And Republicans have a problem with helping people buy health insurance with premium subsidies???

NY Times: If Foxconn lives up to its investment commitment and receives the full $3 billion tax break, it will be the fourth-largest incentive deal in United States history, according to Greg LeRoy, executive director of Good Jobs First, a nonpartisan nonprofit research group in Washington that tracks economic development subsidies.


“We can only describe this as a gift from Wisconsin taxpayers to Foxconn shareholders. This is a guaranteed loser for the state.”

And there's a reason Foxconn never fulfilled their promises building plants and creating jobs in other states and countries:

Unlike Wisconsin, Foxconn said, other states like Pennsylvania and countries like India and Indonesia had not given the company the incentives it considers necessary to make the projects work.

NOTE: There's a reason Scott Walker is drooling over the deal; he can use taxpayer money to cinch his reelection by bringing Foxconn to Wisconsin. Who needs campaign cash?

Foxconn's Crony Capitalism is Back with a Vengeance: Back in May of 2016, I wrote this:

What was Paul Ryan's most recent political con: Ripping on crony capitalism. He said that all the while Republican governors were creating crony "capitols" in every red state. 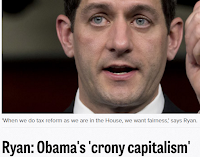 President Barack Obama’s most recent tax overhaul for corporations is just “crony capitalism,” Rep. Paul Ryan says. “It’s a raw deal and I think it’s more crony capitalism. The president likes to pick winners and losers. He lets some businesses off the hook…”

And yet, Ryan's dislike of Crony Capitalism didn't slow him down at all...

Mr. Walker and Mr. Ryan, along with state elected officials, had dinner with Foxconn executives to hammer out details. Aides to Mr. Ryan also lobbied state officials including Robin Vos, the speaker of the Wisconsin assembly, to support an incentive package for Foxconn.


"I think the Federal Reserve has given us, in combination with Obama policies, more regulations, higher taxes, more uncertainty; has given us trickle-down economics ... that growth is not translating down to the middle class. It's not lifting people out of poverty ... This is what we're practicing right now."”

It was such a surreal and contradictory statement that even Thomas Frank had to chime in:


WSJ-Thomas Frank: He savages "crony capitalism," pausing to note the "resentment" it is inspiring. Mr. Ryan fondly recalls the great deregulatory campaigns of the past (leaving out the embarrassing story of how he and his colleagues overturned Glass-Steagall and then watched the banking industry explode in a fireball of freedom).

The way to bring big business down is by deregulating even more. If this sounds twisted and counter-intuitive, that's because it is ... the tail-chasing logic behind the "down with big business" rhetoric probably won't make any difference … we may be heading for the greatest burst of fake populism...