Voters against...but for Walker/Republican agenda? How do they do that?

What's wrong with this picture: 25 to 35 percent of the Republican base will go along with anything their party leaders do, even handing taxpayer money over to Foxconn and calling off the next presidential election. That's nuts right?

They'll even put up with the Walker Wrecking Ball: Remember when our "Unintimidated" governor Scott Walker, who spent $7.8 million for law enforcement protection during the 2011 protests, blamed Obama and Black Lives Matter for the number of police shootings in the news, when in fact, those numbers were on the decline. Republican voters bought into it:

Trump-Like-Me: Walker has never condemned the white nationalists specifically either, and if he had his way, would simply ignore racial tensions ...


"One, I think in general if anyone focuses on racial discord we’re going to get more. Instead of focusing on what divides us, we need to concentrate on what brings us together."

And like Trump, Walker has always believed it's a "winner take all" world of politics:


Scott Walker: "I think actions speak louder than words, and once ground is broken and we’re going forward with this and they realize there’s a sound plan not only to build family-supporting jobs but there’s a sound plan to continue to protect the environment, I think there will be support as there has been for other things we’ve done in the past."

Let's take a look at Foxconn's support. It appears no matter what Walker does, in contradiction to what voters want, he's still okay. PPP's latest results in one district prove that point: 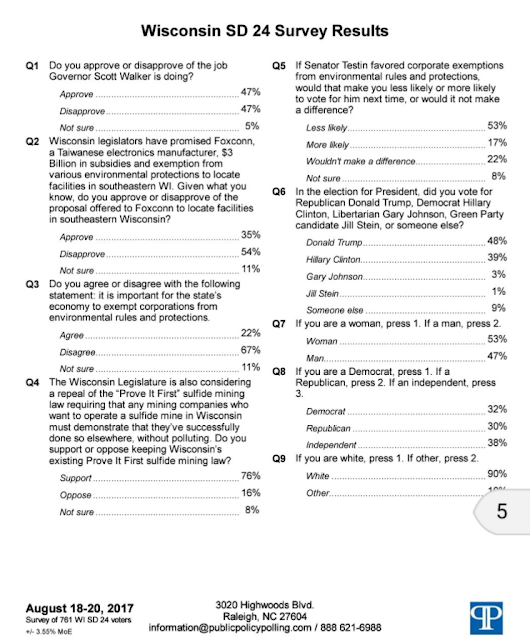 Walker was asked by reporters about new polls conducted in four state Senate districts over the weekend that show, on average, 55 percent of voters in the districts disapprove of the proposed Foxconn deal.  Some who oppose the deal — and even a few lawmakers who support it — have raised concerns about the environmental exemptions, which Walker said Tuesday was a result of "hype and hysteria."

After all, the environmental damage will no doubt be a difficult problem long after Walker is governor.
Posted by John Peterson, Democurmudgeon at 8/24/2017 12:08:00 AM