Democratic Sen. Vinehout on Foxconn: "Should (we give) a great deal of money to one company?"

Scott Walker is willing to toss Wisconsin's future into utter chaos just so he can keep his own job. That's the basic truth here.

Remember, this is the guy who said he wanted to be president so he could wreak havoc in Washington, not exactly a plan most mature adults were looking for. Yet what else could explain his lack of concern after learning about the 25 year break even point for the massive taxpayer giveaway to Foxconn? 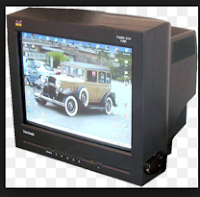 25 years!!! 25 years ago we didn't have any large screen TV's, just the big tubed half ton televisions like the one pictured here.

So imagine what the display market will look like a quarter of a century from now.

Back in 1997, plasma TV's hit the market and consumers lapped it up. They were replaced 13 years later by LCD TV's. Now think 25 years from now...:


1. "In the 2010s, plasma displays have been discontinued by numerous manufacturers."

Republicans Huddle to Play Down the Legislative Fiscal Bureau Report: Reactions to the report? Not available! Did the Republicans take seriously the CBO report about their free market health care plan that dropped 22 million people? Of course not.

Expect talk about helping "the whole state" and bringing the digital age to Wisconsin (a little late on that one guys) to reach ridiculous levels as Republicans struggle to convince those now hapless "left behind" rural voters to vote for them again:

1. Taxpayers would pay to Foxconn Technology Group about $1 billion more than the state received in tax revenues during the first 15 years of the project.

2. The state would start to recoup those payments starting in 2043 — or a quarter of a century after the project starts (based on 13,000 jobs).

3. The more out-of-state workers that commute to the plant, the further away the break-even date will be.

4. The Foxconn project would likely take $15 million out of the next two-year spending plan’s general fund and more than $522 million in the following two-year state budget.

5. Fiscal bureau director Bob Lang warned that any cash-flow analysis that covers a nearly 30-year time frame must be considered “highly speculative, especially for a manufacturing facility and equipment that may have a limited useful life.”

7. Another bill provision to rebuild and expand I-94 in the area of the proposed campus would cost about $408 million in principal and interest re-payments between 2019 and 2042, according to an estimate from the state Department of Administration.

8. Fiscal estimates also show provisions exempting Foxconn from sales taxes on construction materials and equipment would result in $139 million the company would not need to pay. Local governments would have gotten about $10.7 million in revenue if the exemptions were not in place and Foxconn created the same campus at the same size investment, the estimates show.

Leaving Rural Republicans Behind...Again. Fool Me Once...: The most most obvious con that desperately tries to kiss up to the rural supporters is the empty claim the whole state will benefit:


A Foxconn-commissioned analysis shows for every 10 jobs created there, 17 jobs would be created elsewhere in the state

Walker in a tweet said, “Foxconn is bigger than just future tax revenues” and that the project would add more than $10.5 billion in payroll to the state economy.

Democratic Grownups ask the Big Questions, should we give so much money to just one company?: You've heard the Scott Walker hype, what about the Democratic perspective? There isn't even a comparison:


UpFront with Mike Gousha: The potential number of jobs created, the billions Foxconn will invest and the billions in tax incentives ... “There's definitely a difference between the hype and the small print,” Sen. Kathleen Vinehout, D-Alma, said on the talk show." Vinehout said the details of the deal need to be spelled out to protect against what might happen if Foxconn doesn’t come through.

Vinehout said (promises were) not specified in the bill or the memorandum of understanding with Foxconn signed by Gov. Scott Walker. “If we don't get it, can we get that money back? Looking at the bill we may get it back, we may not get it back, it doesn’t say we shall.”

Jon Peacock, director of the Wisconsin Budget Project, appeared on “Capital City Sunday,” and said he didn't think the government would be able to recoup its investments, as there are not currently “enforceable clawbacks in place.” He was particularly worried for local Tax Increment Finance (TIF) districts ... they “would really be left holding huge debts that they couldn't pay back.”

A recent report by the Wisconsin Budget Project, a self-described nonpartisan nonprofit focused only on the new credits for jobs and capital expenditures the bill would create for Foxconn ... It found that under the “best-case scenario,” wherein Foxconn would create 13,000 jobs that would last over 15 years, the cost to the taxpayer was just over $17,000 per job per year. But in another scenario with only 3,000 jobs lasting 10 years, Wisconsin would pay over $54,000 per job per year ... Foxconn jobs would pay an average salary of $53,875 a year.

Vinehout: “What’s it going to look like to the budget? How much are we going to have to cut schools, and health care, and local government and roads in order to pay for these tax credits? That’s the math that the legislature needs to see.”

Labels: Foxconn
Email ThisBlogThis!Share to TwitterShare to FacebookShare to Pinterest