Scott Walker needs Foxconn badly. But it won't change how much he's destroyed the middle class.


Pew Charitable Trusts, through its Stateline blog, has found that the middle class has shrunk in every single state between the years of 2000 and 2013 ... there was truly nowhere to hide from the economic downturn that began in late 2008. The fall in middle class ranks was also accompanied by drops in median income in most states as well. 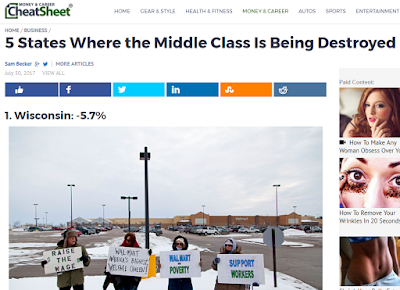 The clear winner (or loser) in the race to the bottom has been Wisconsin, losing 5.7% of its middle class households since 2000. Average median income has dropped by roughly $9,000 annually, and costs of living have gone up as well. There have also been many political battles that have not worked in the middle class’s favor. Governor Scott Walker gutted many of the state’s unions — which has a big effect on the middle class — and all signs seem to indicate that he will aim to implement similar policies. Like Ohio, Wisconsin’s makeup was particularly vulnerable to a recession, and the proof is in the numbers.