The story no one is talking about? Trump's frequent use of material from white supremacists. The CNN wrestling video has it's roots there...and that's outrageous and inexcusable all by itself. But that's not the discussion we're having is it? And it should be.

Not so Funny Right Wing Humor: At least the guy responsible for much of the video, and his past racist bigoted posts, has seen the light apparently, with his thoughtful message captured below:

'I am in no way this kind of person': Reddit user, HanAssholeSolo, who created Trump's CNN body-slam meme apologizes for his racist and anti-Semitic posts ... The post, in which the user also urged other trolls to consider the impact of their actions and promised to quit posting from his account, has since been deleted from the site. "HanA--holeSolo" took credit for creating the meme on Sunday.

"I wake up and have my morning coffee and who retweets my s---post but the MAGA EMPORER himself!!! I am honored!!" the user wrote. "HanA--holeSolo's" post shined a spotlight into an often dark corner of Reddit, where racist, anti-Semitic, and xenophobic posts are common. The user's own history is rife with examples. 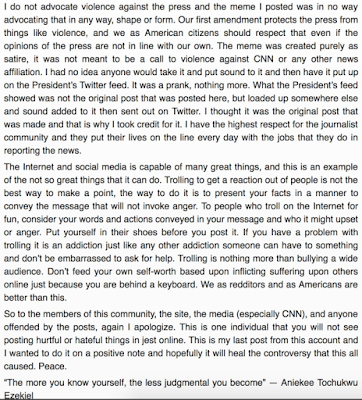 And here's the exclusive interview with CNN reporter, CNN: