Shout it from the hill top...

...since Scott Walker and possible gubernatorial challenger Mayor Paul Soglin took office within 3 months of each other in 2011, Walker added 60,000 jobs in Wisconsin.

But wait, 40,000 of those jobs were created in Madison, and the Madison area (Dane County), according to Soglin.

Someone is riding the coattails of progressive liberal Madison and Dane County (Milwaukee too, see below). Opportunistic Scott Walker. His reaction to Soglin's plain talk thoughts about running?


"It would make for a lively race. He’s an unabashed throwback to the 1960s radical liberal. I’d love to have that battle.”


Soglin: "The governor goes around saying 'well we're in the top ten, in terms of high school graduation rates.' The governors right. But he's doesn't finish the sentence. When he came into office we were 2nd in the state...now we're 8th.

Thanks to Soglin, Madison's 2.2% unemployment rate is driving down"Walker's" statewide average too. And yet we should thank coattail Scott?

Walker's former gubernatorial opponent and all around bad liberal Mayor Tom "streetcar" Barrett did almost the impossible, yet Walker is trying to take credit for that too in a few of his official tweets:

At 4 percent, the city of Milwaukee’s unemployment rate is tied for the lowest on record. 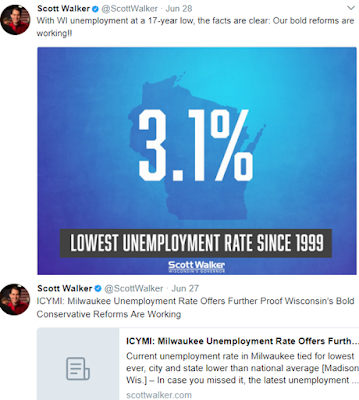 Remember, Scott Walker nearly bankrupt Milwaukee County when he was county executive. We're on that same glide path as a state.
Posted by John Peterson, Democurmudgeon at 7/04/2017 04:29:00 PM