Paul Ryan has a sneaky plan to privatize health care and Medicare in his House budget plan, independent of their cruel AHCA bill, and no one is taking notice, except for Modern Health:

The House Budget Committee on Wednesday agreed to bake in hundreds of billions in Medicaid cuts from its ACA repeal bill to the budget resolution, plus an additional $114 billion in cuts over 10 years. The budget resolution, which is the foundation for passing tax reform in the Senate without Democratic votes, also assumes Medicare will reduce spending by $487 million from 2018 to 2027.

Again, House Republicans are also inserting their AHCA health care repeal cuts, into the BUDGET! Ryan is taking no chances when it comes to taking down our health care safety nets. These supposed “budget” items could strip seniors of their lifelong savings and fatten insurance company profits:


1. Imposing a work requirement on Medicaid adult beneficiaries who are younger than 65 and are not on Social Security disability as a condition of eligibility.

2. The Medicare savings … using vouchers to buy insurance … Democrats during Wednesday's hearing complained that traditional Medicare would cost 25% more than it does now if vouchers come into play.

3. Savings that would stem from raising the Medicare eligibility age for future beneficiaries who are 51 or younger to 67 … (including) full Social Security benefits.

4. The Congressional Budget Office has estimated that would reduce Medicare spending by 2% once everyone in the program is covered by the later eligibility age.

6. People with incomes of $1 million or more pay the full cost of Medicare premiums without any federal subsidy.

I'm not sure how much good it'll do, but doing nothing isn't an option: 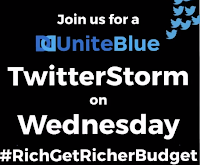 Wednesday 7/26, at 7:00pm ET/4:00pm PT for a Twitterstorm to fight the draconian GOP Budget. Please share this by Retweeting the pinned tweet on @UniteBlue and via DM.