Foxconn Con? The Wonders of the Free Market!

Don't get me wrong, I'd love to see the Foxconn jobs deal work, it's just that there are so many questions, and so much of our tax dollars tied into the deal. One thing for sure, it was all about narcissist Trump:

Think about it. Bloomberg Businessweek:

Wisconsin is about to shell out as much as $3 billion for the privilege of luring Foxconn Technology Group. At $519 per citizen, it would have been cheaper to buy an iPhone for every man, woman and child in the midwestern state.

There's a hard reality about corporate welfare; Republicans love to pick winners and losers, taxpayer money for business is a heck of a lot better than helping Americans when they need it, and there is no such thing as a "free market." Pretty simple to figure out, thanks to Foxconn:


Let's take a look at those figures: Wisconsin is paying as much as $1 million per job, which will carry an average salary of $54,000. The state's economic development corporation is selling the project to taxpayers with a claim that it will create 10,000 construction jobs for building the facility and another 6,000 indirect positions. It's expecting $3.3 million of investment per employee from the Taiwanese company.

Politicians, lobbyists and Foxconn can make the figures work by being generous with the facts. For example, if every one of those jobs came to fruition, they can claim 29,000 positions for $3 billion, or $103,000 per job. But that's not going to happen.

Foxconn has factories in China and another dozen countries globally, yet that stated $10 billion investment is more than the group's publicly traded flagship -- Hon Hai Precision Industry Co. -- has devoted to capital expenditure over the past five years combined.

If billionaire chairman Terry Gou really does dish out $10 billion on this facility, the only way to make it viable is by keeping staffing low ... This LCD factory will be either labor intensive or highly automated. It can't be both.

Empty Promises? We were warned...

Gou signed a deal with the government of Jakarta, Indonesia's capital and its biggest city, to invest $1 billion and employ local workers to make electronics. That never happened. Neither did a $30 million high-tech factory in Pennyslvania that was announced a year earlier. Just this past year, Foxconn is reported to have pledged investments of $5 billion in India; $3.65 billion in Kunshan, China; and $8.8 billion in Guangzhou. It's too early to know if those sums will ever be spent, but including Wisconsin, the tally now stands at $27.5 billion of commitments. That's more than Hon Hai has spent in the last 23 years.

Terry Gou didn't get where he is today by blithely spending money on huge factories. Instead, he's learned to entice leaders into thinking big, and then letting them pay. Wisconsin shows that Foxconn isn't building the American Dream -- America is building the Foxconn machine. 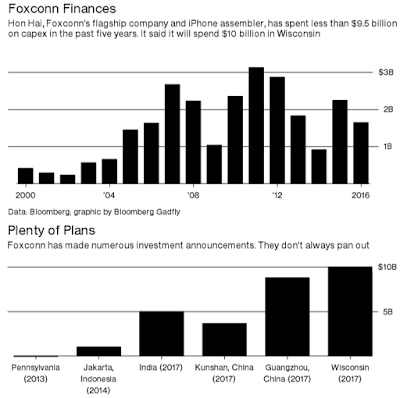 And not surprisingly, Walker takes his shot again at destroying the Wisconsin environment:

1. Exempt the project from an environmental impact statement. The state Department of Natural Resources conducts impact statements for large projects, with recent examples including the proposed golf course by the Kohler Co.

2. Allow the company or its contractors to discharge dredged material and fill into wetlands without state permits, though federal permits could still be required. The legislation would also exempt Foxconn from a requirement that companies try to avoid filling wetlands when possible, though the firm would have to restore wetlands elsewhere if it did.

3. Let the company build on a riverbed or lakebed, connect artificial bodies of water with natural waterways and change the course of streams without getting state permits. The Foxconn plant is expected to need large amounts of water from Lake Michigan.

4. Exempt the project from having to get certain approvals from the Public Service Commission, authorize lower utility rates for Foxconn for at least 10 years and allow transmission lines to be relocated without state approval.

Labels: Foxconn
Email ThisBlogThis!Share to TwitterShare to FacebookShare to Pinterest