FCC says Internet NOT a Utility now...yet Wisconsin GOP starting to think it is?

This isn't just about the inability of the Republican Party to run our government responsibly, it's also about a lack of awareness and the eventual realization that the "lefties" were right all along.

Well guess what? A few contradictory things just happened: The Republican dominated FCC is now saying the internet is NOT a public utility, essentially repealing net neutrality, while Republican legislators in Wisconsin are now realizing it just might be a public utility. Huh? God these people are slow.


The state is turning down $23 million because state taxpayers would have been on the hook for the entire amount if the state could not meet the grant's precise requirements, Mike Huebsch, secretary of the state Department of Administration said. Actually, high-speed Internet is part of the necessary infrastructure that is vital to communities that want to grow. The state will get there anyway, but this money could have speeded up the journey.

Fast forward to today with the news Microsoft picked our state to pilot a rural broadband experiment. It appears WPR is under the impression Republicans have been leading the rural broadband charge all along, not the Democrats:

For state lawmakers, bringing high-speed internet to rural Wisconsin has been a top priority. In May, the state Assembly passed a bill that would allocate $35 million to expand broadband in rural areas (state revenue folks).

Peanuts. 6 and half years ago we could have been well on our way, creating rural businesses and jobs with that $23 million federal offer.

2. Suddenly, Republicans think High Speed Internet is a Utility and Job Creator? It's not just hypocrisy, it a contradiction to their party position and federal policy. First, FCC Chairman Ajit Pai, seeing a conspiracy theory behind net neutrality: 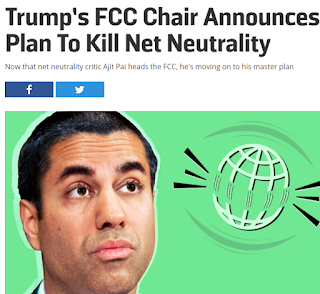 Pai said he would reclassify the internet through Title I of the Communications Act, rather than Title II. Without further explanation, Pai also claimed that the earlier net neutrality rules were actually a deliberate distraction created by the Obama White House: “In order to energize a dispirited base, the White House released an extraordinary YouTube video instructing the FCC to implement Title II regulations,” Pai said.

Here's what a few suddenly "enlightened" state Republican legislators are now saying, 6 years after the fact. See if you can see the contradiction:


"One of the biggest things that I hear repeatedly is that people would like to work from their home or help their children with school projects. A lot of other things are necessitated by having a good internet connection, and that is something that is very sketchy in up in our area as of now."

For state Rep. Romaine Quinn, R-Rice Lake, the lack of decent internet in all parts of Wisconsin could slow the state's growth.

"It's a health care issue. It's an economic driver issue. And it's an educational piece too. Everything that we do in life now kind of revolves around having internet access, whether we want to use it or not. It affects everyone. Especially business parks. If you don't have a business park that is wired to high-speed internet with a large bandwidth and capacity for users, you're not going to have businesses move there. Plain and simple."

Here's the outrageous kicker, and what made me write this blog post:


Felzkowski said  ... she'd like to see the internet be treated as something akin to a utility in the future.


"Back in the 50s, when the government said that everybody was entitled to electricity — that it's an economic driver, it's a quality of life issue — we made sure that everybody had electricity and everybody had access to a telephone. This is the same concept that we're working under with broadband. So, the investment will be there to get broadband to the residents of the state of Wisconsin."