The one common theme coming from Vos-Republicans; weaponizing the very problems they've created or refused to solve - like broadband, immigration, and now the pandemic - by incoherently blaming the Democratic governor.

We saw this same ploy used against Obama's slow but steady economic recovery from the Republican created Great Recession. Any one see a change under Trump? Nope, the pace of growth was the same: 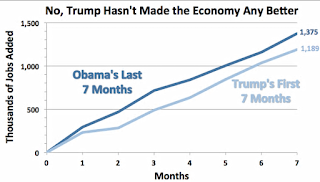 Hyperbolic Anger toward "lazy workers" is another Manufactured Outrage, but it  makes them feel good: There is a worker shortage, yet Wisconsin is already near the unemployment rate just before the pandemic:

After the state’s unemployment rate skyrocketed to about 14% in April 2020 due to the pandemic and subsequent shutdowns or restrictions on several industries, it began to slowly fall last year. As of March, the unemployment rate was 3.8% — near the 3.5% rate in February 2020, according to the state Department of Workforce Development.

After a global pandemic and major business adjustments, Republicans expect economy and employees to come back immediately, like flicking a light switch?

The reopening of the economy, fueled by substantial federal aid and rising vaccination rates, has released pent-up demand among consumers to eat out, travel, shop, attend public events and visit with friends and relatives. Companies can't hire people fast enough.

"It’s a (job) applicant’s world right now,” said Tom Krist, majority owner and president of Wisconsin job placement agency WFA Staffing. But even prior to the pandemic, there were tens of thousands of unfilled jobs in Wisconsin. Tony Sarsam, CEO of SpartanNash, a Michigan-based grocery distributor and retailer said, "What everyone seems to have forgotten was that pre-pandemic, the number one, two and three issues employers had was finding talent,"

Vos-Republicans Blame Gov. Evers/Biden and $300 UC funding for Worker Shortage: Vos-Republicans oddly keep telling us how business owners are complaining to them that they aren't doing enough to force workers back. But are they also hearing complaints from workers? Will reporters ask? Note: Taking away $300 UC funding would hurt gig workers, and take away money that would be spent locally to jumpstart the our state economy:

“There probably was a time when it made some sense to pay the supplemental benefits,” Sen. Howard Marklein told reporters. “To me, that time has lapsed and the government needs to quit competing with our local employers. We need a reset here.” Currently, enhanced federal benefits are slated to run through Sept. 6.
The GOP legislation follows a growing number of business organizations … 50 chambers of commerce, including Wisconsin Manufacturers and Commerce (WMC), sent a letter to Evers again asking that the state stop participation.

Below you'll notice how WMC panicked back in 2017, not blaming Scott Walker of course, saying this was "Wisconsin mega-issue."

Blame Gov. Evers for Decade old Workforce Shortages and Unfriendly Worker Laws: Under Scott Walker's watch, he did all he could to keep wages and benefits low, not budging on a minimum wage hike, and blocking local communities from creating their own minimum wage requirements. Here's my tweet:

From a Wisconsin State Journal story in 2017:

We were warned about this problem, but as usual, Vos-Republicans focused on tax cuts and not the growing labor shortage. And this was all before the pandemic made things much worse:

…symptoms of a growing worker shortage that is expected to worsen over the next decade, according to Wisconsin State Journal interviews with dozens of employers, economists, advocacy group experts and state political and economic development officials.

"We are right at the brink of the crisis," said Ann Franz, director of the Northeast Wisconsin Manufacturing Alliance in Green Bay. "There just aren't enough human beings in Wisconsin with baby boomers retiring."

Did Republicans do anything about the growing shortage besides running ads in Illinois trying to poach job seekers there? Of course not. Again, these comments below were made in 2017, and another example proving Republicans can't govern:

"I would call it Wisconsin's mega-issue," said Kurt Bauer, president of Wisconsin Manufacturers & Commerce, the state's largest business group, which recently found 77 percent of members surveyed had difficulty finding workers, up from 53 percent two years ago." Many of the jobs advertised pay so low that they can't support a family or even sustain a single person. For some a low-wage job isn't worth the loss of government benefits.
Susan May, president of Fox Valley Technical College in Appleton. "The more we lose our economic base, it affects education and transportation and everything else. … It really presents a scary future for our state."

Are you sitting down? Here's Scott Walker downplaying his biggest problem and a "scary future":

"It's a good problem to have, but it's a challenge for sure," Gov. Scott Walker said in an interview.

And Biden is trying to end this obvious but ignored Republican problem:

Low-income workers might lack access to transportation and child care, making it harder to work or receive training. In some cases the potential loss of public benefits or garnished child support payments make working for $10 to $12 an hour less appealing.

Vos-Republican Power Play, Again: The current scheme by WI Republicans is to defund everything in the state budget so they can force the Governor to spend COVID relief funding the way they want. Yes, a pouty tantrum. Here's just one example of their transparent and grotesque power play: