I have so had it with the "critical race theory" gaslighting and phony outrage. It's being used as an excuse to violate the First Amendment but also distract. Surprised?
I hate to take this much space up to a QAnon created outrage, but here it is.
1. Campus Free Speech/Academic Bill of Rights: How many years did we have to endure poor victimized conservative students whining about being afraid to say anything in class for fear of rejection, or how they were silenced, and how tstudents and teachers penalized them for their crazy opposing views?
Now, the rightwing is silencing subject matter like racial injustice and equality they don't like in classrooms, by passing state laws banning the topic outright with threats of fines and firings. Where the hell are the lawsuits claiming academic free speech or a violation of the First Amendment? Guess this was always bullshit scheme from the start. But we already knew that.
2. If they get away with this...? By passing CRT through rightwing propaganda machine on maximum overload, will they realize they can do this with anything? Here's a tweet by a Republican operative saying just that: 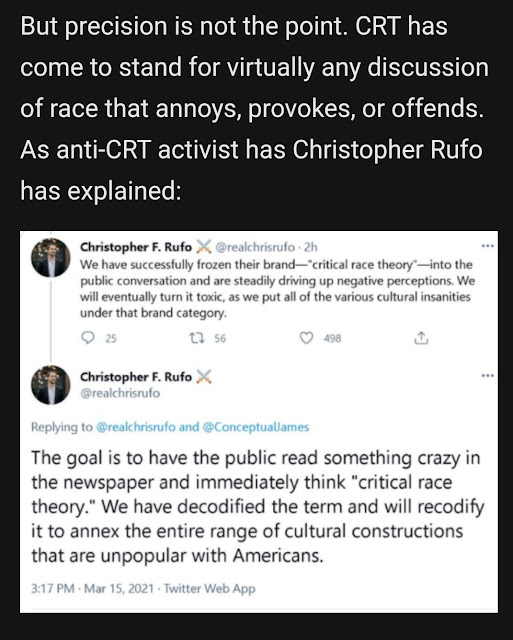 If that wasn't enough proof (let's face it, MAGAt's probably never took the time to read it), here's an interview with the person who co-created Critical Race Theory, Kimberle Crenshaw, who explains what it is and isn't, and what's really going on.

“We’re basically just asking questions and looking at the way that law has been a conduit for racial inequality and what we need to do about law,” co-founder of Critical Race Theory Kimberlé Crenshaw says what Republicans are getting wrong about her work. https://t.co/WpY5oK88SF

“Its connotations are all negative to most middle-class Americans, including racial minorities, who see the world as ‘creative’ rather than ‘critical,’ ‘individual’ rather than ‘racial,’ ‘practical’ rather than ‘theoretical.’ Strung together, the phrase ‘critical race theory’ connotes hostile, academic, divisive, race-obsessed, poisonous, elitist, anti-American.” - Rufo

CRT, taught in colleges, provided a way to question how laws over time have affected racial inequality. Historian and author Kevin Kruse: 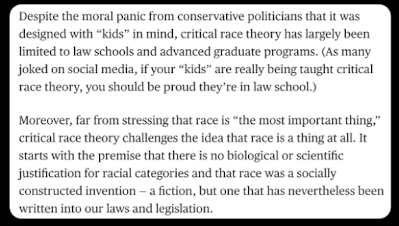 Knowing what CRT really is, this clip of Ted Cruz should now look like a comical exaggeration, absolute buffoonery;

Charlie Sykes, The Bulwark: "But if we are banning this sort of thing, why stop there? If CRT derives from Marxism, why not ban Marxism too? (Or would that smack too obviously of censorship, cancel culture, and the attack on free speech?)

If critical race theory is beyond the pale, where are the bills banning or restricting all of the other criticals, like critical social theory, critical legal theory, (or anything developed by the Frankfurt School.)

If conservatives really want to take on political correctness in education, why not also ban post-modernism, deconstructionism, moral relativism, and anything written by Jacques Derrida?

And since Ted Cruz and Marco Rubio are so concerned about Oppression Studies, where is the legislative push to ban Radical Feminism, including arguments that science is deeply aligned with “sexist, racist, classist, and imperialist social projects.” 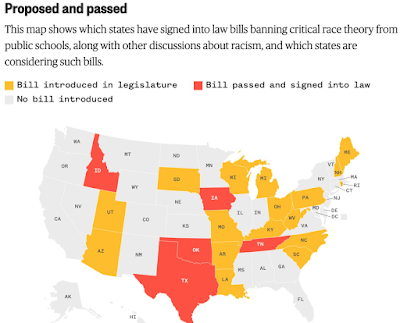