Election reform has hopefully moved closer to passing in the Senate after roadblock Joe Manchin offered his own watered down but still important reform points: 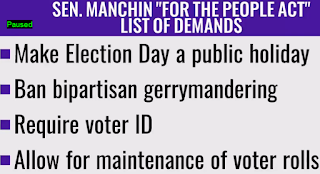 I'm bringing this up because two major Republican points gushed from this breaking news, (1) one blatantly racist comment sure to please QAnon cultists, and (2) one BIG lie.

McConnell: "A revised version produced by one of the Democrats yesterday, which has been endorsed by Stacy Abrams..."

2. You don't want Computers Drawing up Redistricting Maps, do you?: In the video clip above, McConnell actually warned Americans that Democrats want to draw redistricting maps with "computers."

McConnell: What Democrats want to do is "...remove redistricting from state legislatures and hand it over to computers, equally unacceptable, totally inappropriate, all Republicans would oppose that as well..."

...but that's how its done now. For low information heavy breathing aging MAGA's, who have never accepted the computer age, this is a "big tech" steal. It's also another BIG LIE.

McConnell knows this. Computers have been meticulously slicing and dicing districts for Republican advantage for years. I tracked down just a few "computer" references...:

Wisconsin Democracy Campaign: The Republican leadership hired demographic specialists and computer experts to employ the latest mapping technology to create maps that were more rigged than almost any in modern history.

FiveThirtyEight: We drew six of these sets by hand — Nos. 2-6 and No. 8 — using a tool called Dave’s Redistricting App. The districts for No. 7 were designed by a software engineer named Brian Olson.

Science News: Tests that have emerged over the last few years, known broadly as ensemble methods, rely on computers to generate thousands, or even millions, of possible maps. The programs draw myriad boundary lines around a given district and estimate which party would win that district under each scenario.