Let's get this right; we should send in the WI National Guard because people in Milwaukee are using guns to settle their differences. No one could have seen that coming.

Rep. David Bowen (D-Milwaukee) said, “I hope that Rep. Sanfelippo is aware that sending the National Guard into our communities — literally imposing an occupying force on our neighborhoods — will do nothing but escalate already tense situations. This knee jerk reaction of sending in actual military forces without any training in community relations would make an already bad situation even worse.”

But Republicans own these shootings and the civil decay gun madness has brought with it.
Rep. Joe Sanfelippo's press release betrays the death party's madness over firearms; the word "gun" got one mention:

It's another problem Sanfelippo and Vos-Republicans have created. These arrogant gerrymandered freeloaders gleefully made sure Wisconsin voters saw their antics at the Capitol.
Republicans Gavel in, Gavel out, Gov. Evers Special Session on Guns:

Anyone Listening to Democrats? Who? The echo of Democratic legislators comments are barely audible above the right wing noise machine. Similar to the pandemic...:

"This is an epidemic," State Sen. Melissa Agard said. "It's a public health crisis and has to stop. It's time to get serious about real, life-saving gun reform policies right now. We must treat these domestic terrorists who are inflicting gun violence on all of us as if it's a national crisis. Legislative action has been proven to save lives.

...in 2019 called a special legislative session to expand background checks … Republican lawmakers shut down the special session seconds after convening it.

For anti-regulation Republicans, dying comes first, and then tough on crime "justice:" 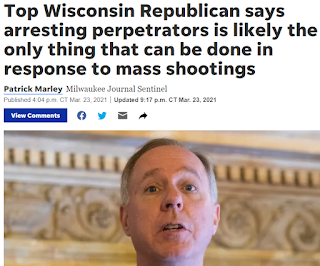 "I have not seen exactly how in the circumstances that they described that the guns were obtained, but if they were done lawfully, it seems like we already have a process and if someone chooses to break the law, there is very little that we can do besides arrest them after they’ve committed the act." -Vos

Republicans Hate Milwaukee: Oddly, both Milwaukee and Madison are the biggest revenue contributors to the state coffers. Maybe the rest of the state can do without their help?

Sanfelippo blames local officials for the spike in crime in Milwaukee, but experts are less sure about the reasons — pandemic related stress, increases in unemployment, schools closing, high profile incidents of police violence and massive protests against the police are all possible theories.

Milwaukee officials are also facing a budget crunch after decades of decisions by Republicans at the state level to given less in resources to Milwaukee. Republicans in the Assembly also recently passed a — likely unconstitutional — bill that would exempt Wisconsinites from federal gun laws.

Sanfelippo also isn’t the only Wisconsin Republican using incidents of gun violence in the state’s urban areas for political reasons. Former Lt. Gov. Rebecca Kleefisch was tweeting on Tuesday about increases in homicides in Milwaukee and Madison.

“This is tragic, deadly failure,” the likely Republican candidate for governor in 2022 wrote.