We don't have a civil society anymore, thanks to a deteriorating Republican philosophy that has morphed into daily manufactured points of outrage that stoke political tantrums that energize their base. They are bullies dead set on testing limits proudly, receiving encouragement from those they've "owned."

This is what has replaced governing. In fact, their "convictions" are now based on whiny petulance ("the quality of being childishly sulky or bad-tempered")

The "Digging in his Heels" Tantrum: Scott Walker appointed Natural Resources Board member Frederick Prehn is digging in his heels and won't leave his expired seat because newspapers criticized him. Belligerent arrogance was his answer to a problem he created. Here's his response. Keep in mind these are the rantings of  a supposed "adult:"

"Now I'm choosing to run with my convictions. When I get backed in a corner, I get trenched in. I've listened to a lot of constituents. Many want me gone, but many want me to stick with my convictions. I've had attacks on my personal character. And if the extremists think they'll get their way, they don't know me very well. When you say stuff like this you're singling me out as a second-class citizen. And I am not a second-class citizen. I will vacate that board when I'm ready to, or I've had enough or can't contribute anymore or the Senate confirms someone else. Then Evers can have his board."

Vos Crumbles after Trump Criticism, and How Unbiased are Judicial Activists? Thank you Robin Vos, for showing us what an authoritarian government looks like. Wow. State Journal:

"Misinformed," Trump? Love the irony that Trump's bullshit is now raining down on WI Republicans. Welcome to our world.

Lying is what Trump does best! Republicans are now saying what liberals and the press has been saying for 5 years. But also keep in mind that no matter what Vos might say: “Don’t fall for their lies!” Trump said.

“I think this is one of those cases where the president was just misinformed by his staff or he didn’t see the media reports,” Vos said

LeMahieu said Trump’s statement was “really unfortunate. I don’t know where he got that information from,” he said. “We’re auditing the election results.”

Vos announced that former conservative Wisconsin Supreme Court Justice Michael Gableman will serve as the attorney who will oversee the election probe. Gableman was in the majority in a pair of 2014 cases that upheld Wisconsin’s voter ID law. 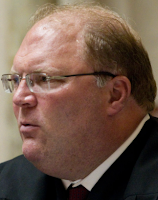 Gableman: "I'm glad to be here — glad to see so many friends. When I fought evil every
day at the state Supreme Court for 10 years, I fought for you."

Gableman's history is also something you just can't make up:

1. He knew a lot of people at the convention were disappointed with how the presidential election was run. "And you didn't just grumble about it...you recognize that this one is where we draw the line."

3. Gableman was a former chair of the Ashland County Republican Party and relied on GOP support to win his 2008 state Supreme Court race against incumbent Justice Louis Butler. and later went on to uphold major pillars of former Republican Gov. Scott Walker's agenda.

5. Gableman ran a false attack ad against Butler (who is black) during his 2008 campaign that prompted an investigation by the Wisconsin Judicial Commission. While staff at the agency alleged that Gableman ran the ad "with reckless disregard for the truth," Gableman's colleagues on the Supreme Court split 3-3 on whether to pursue the complaint, and it was dropped.

Republican voters did choose another crazy person, bigot, and QAnon poser Rebecca Bradley, so it's still a very activist court.