Walker's desperate 15 year grab for 3,000 jobs and forced budget cuts to get reelected.

Funny thing about the Foxconn debacle to attract only 3,000 jobs, is the underlying problem. A labor shortage and low unemployment.

Wisconsin's 3.2 percent unemployment rate in July is near a record low That's well below what economists consider to be "full employment." Between 2010 and 2025, the 65-and-older population is expected to have increased by two-thirds, while the working-age population is expected to remain flat. By 2023, 65-year-olds are projected to outnumber 18-year-olds for the first time.

Only now are the stories hitting the front pages of our papers. 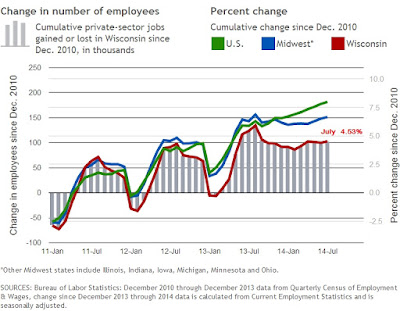 Those numbers are mystifying to Anthony Snyder, CEO of the Fox Valley Workforce Development Board. "We have businesses that are screaming for labor. One employer wanted 300 people tomorrow and we are racking our brain trying to find these people," Snyder said. "I don’t know where they’ll find 10,000 people to fill those jobs."

Erik Anderson, president of Basin Precision Machining in Jefferson said, "I’m like: 'Better fly (the workers) over from China, because they’re not here.'"The disaster we know as WEDC warned: As half of the construction workers and Foxconn workforce could come from other states, primarily Illinois where unemployment and underemployment are higher than in Wisconsin.

That should sink the whole Foxconn deal right? Nope...

The Walker administration disputes that figure.

Foxconn,  isn't divulging details about its wages. According to an economic impact analysis commissioned by the company, about 2,400 employees will be highly skilled engineers, 820 employees will provide business support and the majority, about 9,800 employees, will be hourly operators and technicians.

Walker said he has discussed with Foxconn the possibility of building housing at an affordable cost near the plant to further entice workers to move from other states.

Even cry baby conservative lobbying groups are sounding the alarm:

Workers Wanted: Wisconsin's Looming Crisis:  Wisconsin businesses grapple with a growing worker shortage. Wisconsin is expected to need 45,000 workers in seven years but it simply lacks the people to fill them … expected to worsen over the next decade, according to Wisconsin State Journal interviews with dozens of employers, economists, advocacy group experts and state political and economic development officials. "We are right at the brink of the crisis," said Ann Franz, director of the Northeast Wisconsin Manufacturing Alliance in Green Bay. "I would call it Wisconsin's mega-issue," said Kurt Bauer, president of Wisconsin Manufacturers & Commerce, the state's largest business group, which recently found 77 percent of members surveyed had difficulty finding workers, up from 53 percent two years ago. "All other issues, they may be important, but they are subordinate to workforce."

Walker's record of lost manufacturing job over the years, stubborn opposition to raising the minimum wage, and failed promise to create family supporting jobs is a big reason why he wants Foxconn to pass:

"We have the potential of losing some of our business sector to other places where skilled labor is stronger, where there's greater population base," said Susan May, president of Fox Valley Technical College in Appleton. "The more we lose our economic base, it affects education and transportation and everything else. … It really presents a scary future for our state."

Eh, that's not so scary, turning lemons into lemonade:

"It's a good problem to have, but it's a challenge for sure," Gov. Scott Walker said in an interview.

The other facts around the worker shortage aren't encouraging:


Wisconsin has certain characteristics that may intensify the shortage, such as an already high workforce participation rate, a broad manufacturing base that, as it increasingly automates, replaces high school graduates with more highly skilled workers, and a comparatively poor record of attracting college graduates. The Job Center of Wisconsin website lists about 100,000 job openings daily, and more than 15,000 are for jobs located in other states.

The state's median hourly wage is $17.43, or about $35,000 a year. A United Way study found the basic wage needed to survive in Wisconsin is $54,804 for a family of four and $23,196 for a single adult — and that 42 percent of households live below that level. More than half (51 percent) of the jobs that listed a low-end wage listed hourly pay levels below the United Way's survival wage for a single person.

And with the advent of disposable employees, business has only themselves to blame:

Many employers around the state express frustration about the quality of the available workforce. They complain about new hires lacking minimal "employability" traits such as showing up for work on time, dressing appropriately and basic communication. Some describe applicants who won't return phone calls yet continue to apply for jobs elsewhere, possibly to fulfill the state's new requirements for receiving unemployment benefits.