I couldn't let this story fade into the ether. This is how conservatives drum up conspiracies and victimhood and make these issues seem real; they take a firm stand on fabricated controversies created by the paranoid right wing news entertainment sites.

What drives me crazy it the notion that Republican bigots, racists and anti-government zealots think their being "politically incorrect," when in fact, they're creating another version of "politically correct" speech but their perspective.

Nothing on the DQ sign is a real issue. What is true is the effort by Republicans to push an unconstitutional government endorsed of a national Christian religion:


CBS 58: A sign on the door of a Kewaskum Dairy Queen, calling the restaurant 'politically incorrect' is generating business and conversation.
DQ owner Kevin Scheunemann said,"I felt the sign was appropriate to hang in terms of being transparent about the views of the owner and staff supporting God and country.  It just seems that those kinds of values and principles are becoming controversial in society."

Controversial only because Scheunemann and his right wing party of whiny victims have made is so. 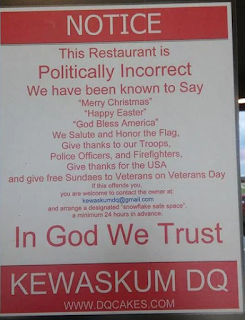 The sign reads: "This restaurant is politically incorrect." It warns potential customers that staff may say things like "Merry Christmas," "Happy Easter." It also says "In God We Trust." The sign was posted close to four years ago, after a customer was upset when he heard Christian music inside the restaurant. Scheunemann decided to post the warning, and said he hasn't had many problems since then.

Of course Scheunemann is expressing his paranoid, conjured up, victimhood, phony-wedge issue free speech thing. And if you don't like his sign, somehow you're against free speech, where Schunemann is victimized again. Got that liberals?

Other business owners in town say they support Scheunemann's right to run his business the way he sees fit. "He posted it on the door so you see it before you walk in," said April Serwe, who owns local bar PJ Magoos. "You don’t have to walk in if you don't agree with it."

Funny, that kind of logic never came up for anti-union conservatives applying for a job at a union shop. "You don't have to walk in..." right? But hey, it's a phony divisive values issue:


In fact, some people in town told us there isn't even a need for a sign like that -- because most residents in Kewaskum share the same values. "In this small community, I don't think it's a problem," said resident Liz Torrison. "We're all just liking each other and having fun."

It's fun targeting and trashing liberals in a completely phony cartoonish way.

Dairy Queen sent us this statement in response: "American Dairy Queen Corporation does not encourage our independently owned and operated franchisees to post non-business related messages in their locations or on their external reader boards. This sign expresses the views of this independent owner only and does not speak for ADQ Corporation or any of our other independent franchise owners. We expect our franchisees and employees to treat every person who walks through our doors with the utmost dignity and respect. Nothing less is acceptable."


But Scheunemann, who also happens to be the Kewaskum Village President, says he's happy to sit down and have a conversation with anyone to make them feel comfortable about what the sign says.