Researching the latest wave of extreme corporate welfare now that Trumpian Republicans are in charge of so many state houses, revealed a few interesting side notes.

Don't get me wrong, I think some government help makes economic sense, but it's the hypocrisy that's driving me crazy.

Socializing the "free market:" Republicans are currently pushing Americans into a "competitive" free market health care system, all the while doing just the opposite by subsidizing all those supposed free market business with taxpayer handouts.

Scott Walker/Trump's deal with Foxconn should top the list for decades, but it's hard to predict how much worse it'll get:


Republicans on Monday advanced a $3 billion incentive package to encourage Foxconn Technology Group to build a display panel plant in southeastern Wisconsin that could employ thousands.a $10 billion plant that would employ 3,000 initially and as many as 13,000 in the coming years ... the incentive package could lead to Wisconsin taxpayers paying nearly $53,000 per Foxconn job (over 10 years for the first 3000 employees). 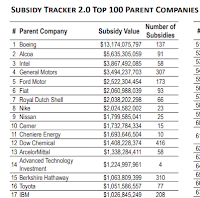 The February 24 Good Jobs First report, “Subsidizing the Corporate One Percent,” by Philip Mattera, says that three-quarters of all state economic development subsidies went to just 965 corporations since the beginning of the study in 1976. The Fortune 500 corporations alone accounted for more than 16,000 subsidy awards, worth $63 billion – mostly in the form of tax breaks. Think about that. The largest, wealthiest, most powerful organizations in the world are on the public dole. Where is the outrage?

The system is antithetical to the idea of free markets. A quarter of a million times, state governments decided what is best for producers and consumers. That should make us cringe ... those 514 economic development programs are almost all the result of insidious cronyism. Free markets be damned. And that outrage should be reflected in how we vote.

From 2016, Salon list a few more corporate welfare recipients of taxpayer money. Next to the Foxconn deal, they seem almost insignificant:


1. Sagamore Development: The real-estate developer owned by Under Armour CEO Kevin Plank won a $660 million deal from the Baltimore Development Corporation ... When completed, this $5.5 billion “mini-city” will include two light rail stations and lots of residential and commercial properties, a new 50-acre global corporate campus at the site.

2. Continental Tire, the Americas, LLC: The Fort Mill, South Carolina-based subsidiary of the German automotive parts manufacturer Continental AG won a $596 million deal from the state of Mississippi to build a tire plant in Hinds County. The $1.45 billion factory will create 2,500 jobs ... nearly $240,000 in taxpayer subsidies for each job.

3. Walt Disney: The media and entertainment giant, one of the world’s most profitable companies, received a $267 million gift from state taxpayers for a planned luxury hotel in Anaheim, California. It’s the city’s largest corporate tax break in history, according to the Los Angeles Times. The Burbank, California, company had said it would not build the hotel without the subsidy.

Charles Pierce at Esquire found another one:


From Bleeding Heartland: The Iowa Economic Development Authority and the city of Waukee refused to release details about the deal with Apple until shortly before the authority's board rubber-stamped $20 million in state tax incentives, plus about $194 million from the suburb west of Des Moines. In return, Apple has promised its $1.375 billion data center will come online by 2020, with 50 full-time employees earning at least $29.12 per hour.

The editorial board of The Des Moines Register: News of the project broke Wednesday, but documents spelling out the amount of incentives were released about 90 minutes before the state economic development board met Thursday. The meeting's agenda included a 10-minute public comment period before approval. The city of Waukee declined to provide the public any information before its council voted to give Apple more than $194 million in property tax abatement and water and sewer infrastructure improvements. Reforming a system that favors out-of-state corporations over Iowa-based businesses? Will any state leader look beyond the hype and seriously examine what we've gained in jobs and economic growth from attracting data centers? A few warehouses full of servers do not make us a hotbed of innovation.

The good news? Disclosure is about to hit the corporate welfare fan...CNN and GoodJobsFirst:


Time to upend conventional wisdom on 'corporate welfare:' Taxpayers are about to gain hard data on economic development tax breaks. The accounting rule is Governmental Accounting Standards Board Statement No. 77 on Tax Abatement Disclosures. GASB is actually not a government body, but rather a professional standard-setting body that controls Generally Accepted Accounting Principles, or GAAP, for the public sector. Governments adhere to GAAP for three main reasons: Some states mandate it, Wall Street likes GAAP accounting when it gives credit ratings, and some federal aid requires it.

GASB 77 took effect for calendar 2016 and beyond, so as governments close their books and report the prior year's spending, most will include a note, pursuant to Statement 77, disclosing how much revenue they lost to each economic development tax-break program. Because most cities, counties and school districts are on fiscal years ending June 30, most of this new data will arrive late this year. Governments won't be required to name company names; they will only report one dollar figure per program per year. And in all but one state, the data will reside in individual governments' financial reports,
In all 50 states, the GASB 77 data will likely spawn a whole new cottage industry of journalists, academics and nonprofits "wrangling" the data, then analyzing it from many perspectives. Taxpayers will be enriched by the ensuing debate.
Good Jobs First is also soon to launch Subsidy Tracker 2, where we will collect and publish GASB 77 data. (Our longstanding Subsidy Trackerdatabase collects company-specific incentive data.)