The story floating around somewhere in the bizarro-sphere is Trump's not so subtle return the same marketing plan he used on The Apprentice, shock value, but this time for his presidency. Michael Hirschorn, President and CEO of ISH Entertainment, and former "Survivor" contestant Eliza Orlins nailed it:

Democurmudgeon would like to welcome the return of former Isthmus political cartoonist Brian Strassberg, with this.... 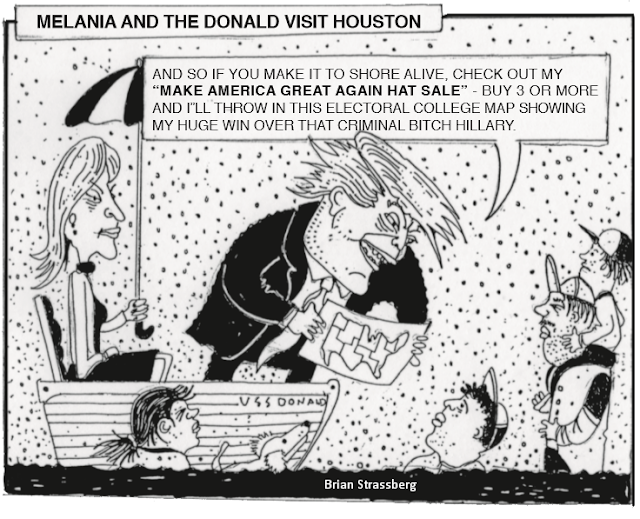 This is even beyond the hackneyed story line of Idiocrisy, which oddly turned out to be closer to reality than anyone would have wanted:


Daily Telegraph: Trump is Camacho. Trump is a big investor in wrestling and once fake-punched a competitor on WrestleMania. Both Trump and Camacho reflect the worrying confusion of entertainment and politics. Trump is popular because he’s well-known, and he’s well-known because he hosted The Apprentice.

He “wins” debates in the sense that he dominates them, and he dominates them by shouting and ranting and saying what’s on his mind. In an era where ratings are confused with quality, producers think that Trump must be onto something and so they boost him. Never mind that if you actually dig down into his ideas they are a confusing nonsense.

And because I have so many videos showing Trump's bold face lying to his trusting herd of followers, here's Mr. Entertainment himself entertaining himself, and lying: