The Sanders Medicare-for-All plan! Democrats finally put it out there...

The biggest problem Bernie Sanders is going to have over his Medicare-for-all plan is paying for it. I heard one radio caller, who claimed to be conservative, call for a national 1 percent sales tax to help pay for the cost. A good idea.

But what so many pundits are missing is Sanders plan is a full throttled dream plan. And for once, Democrats aren't starting in the middle like so many of their past proposals...like the ACA.

Sanders plan is more comprehensive than most universal systems around the world, and that's why the cost is so high, no matter how much money it will save Americans right from the beginning.

Mind Bending Opposition Reasons Defy Logic: The insurance industry just came out with the most ridiculous list of reasons universal care "cannot work," despite the fact every other industrialized country in the world has made it work, and saved money to boot. Let's take a look:

Because the private market worked so well in the past? Didn't think so.

1. Ever Doctor, Every Hospital is your doctor, you hospital: I've heard it so many times before and not one reporter has ever called it into question, how does universal care eliminate choice? Having only one health insurance plan with only one network of doctors and hospitals seems to "eliminate choice" in so many more ways, right? Free market my ass.

2. Chill Medical Innovation? Who seriously thinks creators and innovators will walk away from life saving medical discovery's and equipment because they won't be able to make obscene amounts of money? There is one truth; if someone can't cut it in the marketplace, someone else will step in to take their place. That's the free market.

3. Heavier Burden on Taxpayers? Sure, taxes will go up, but every single American will not have to pay for ever rising insurance premiums, co-pays and deductibles, the uncertainty of being dropped, and those surprise medical bills from doctors not in your network.

The Bernie Sanders Plan: There are a couple of great articles at Voxdotcom that provide a no nonsense look at his plans. First there's a comparison between what the Democrats want to do and the Republicans. Eye opening (below the Sanders plan listed here).

Second, Vox looks deep at what Sanders wants to do and the mounting cost of doing it. Surprisingly, it's not just the U.S. that seems to think dental and vision are not two of the most important parts of our body that need constant care. The U.S. and other countries believe it should be separate, mostly for cost containment.


The plan is significantly more generous than the single-payer plans run by America’s peer countries. The Sanders plan does not subject consumers to any out-of-pocket spending on health aside from prescriptions drugs. This is out of line with international single-payer systems, which often require some payment for seeking most services. Medicare, employer coverage, and these other countries show that nearly every insurance scheme we’re familiar with covers a smaller set of benefits with more out-of-pocket spending on the part of citizens. Private insurance plans often spring up to fill these gaps.

A single-payer health plan would have the authority to set one price for each service; an appendectomy, for example, would no longer vary so wildly from one hospital to another. Instead, the Sanders plan envisions using current Medicare rates as the new standard price for medical services in the United States.

Single-payer systems change who pays for health care, often shifting more of the burden onto wealthier individuals to create a more progressive system. A proposed 9 percent income tax would be far more expensive for the $100,000 worker than the $30,000 earner.


1. It would bar employers from offering separate plans that compete with this new, government-run option.

2. It would sunset Medicare and Medicaid, transitioning their enrollees into the new universal plan.

3. Four years to transition into the new coverage. In the interim, they would have the option to buy into Medicare or another publicly run option that does not currently exist.

Now here's the Republicans latest scheme...and they're not kidding: 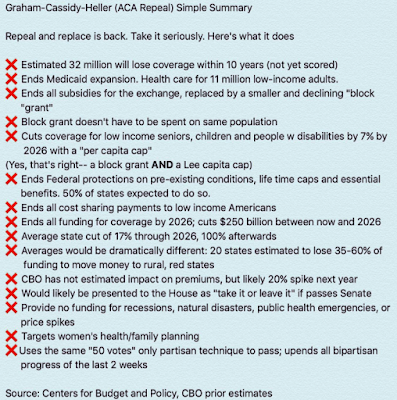 This was an amazing almost surreal twitter post by Fox News. Ironic, a gaffe...because the ACA was a conservative Heritage Foundation idea. Sweet disconnect huh? 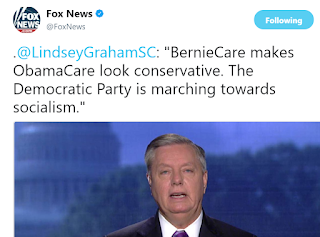 Here's a detailed look at how Sanders plan might get its revenue, which will be no easy task. I can't even summarize it. Here's the last few paragraphs by co-director of the Center for Economic and Policy Research Dean Baker:

There is also a question of what the policy would be if progressives actually took power. What would a Democrat who ran on a single-payer plan like the one pushed by Sanders do if she actually was in the White House? Would she be able to back down and offer less than promised? Perhaps, but this is something worth considering. It’s not clear that it is a good thing for progressives to gain power if they are committed to a program that really is unworkable policy. That has generally not proven to be a good long-term strategy for advancing progressive goals.

There are many steps that can be taken to rein in costs and extend coverage that are short of a big leap to single payer. Lowering the age of Medicare eligibility to 55, as the new Sanders plan proposes, would be good a start, along with allowing a buy in for people at younger ages. We can also look for some of the cost savings envisioned under single payer, most notably public funding of research for prescription drugs and medical equipment so these items can be sold in a free market without patent protection. And, we could be looking to get the pay of our doctors and dentists down to the levels in other wealthy countries, which would save us close to $100 billion a year from our health-care bill.

The target of eliminating almost all out-of-pocket expenses may also be too ambitious. If we set the target at 1.4 percent of GDP, the same as people in Canada and the UK now pay, instead of the 0.3 percent in the Sanders’s plan, it reduces the annual shortfall by $250 billion, apart from any impact on utilization. And it wouldn’t really mean much hardship for most of the population. For example, if a family earning $100,000 a year was expected to spend $1,600 annually on various health-care expenses, it is hard to see this imposing a great burden.

In short, the current political environment is presenting a great opening for progressive health-care reform. This opening could be wasted if progressives are not willing to work for a wide range of reforms that would extend coverage and reduce costs and, instead, insist on a single-minded focus on single payer. The new proposal that Sanders put forward with 16 Senate co-sponsors offers the sort of flexibility needed to structure a workable incremental approach. This is a huge step in the right direction.