Every Republican plan to replace the ACA seems to make our health care system even worse than before ObamaCare. You would have thought after finding out every Republican plan would end up dropping 23 million people from insurance coverage, they would stepped back from their promise and rethink their approach.

Heck, when the insurance industry thinks it'll be too costly and lose too many customers, you've got a problem:

The health insurance industry came out forcefully on Wednesday against the Senate’s latest bill to repeal the Affordable Care Act, suggesting that its state-by-state block grants could create health care chaos in the short term and a Balkanized, uncertain insurance market. America’s Health Insurance Plans was even more pointed. The legislation could hurt patients by “further destabilizing the individual market” and could potentially allow “government-controlled single payer health care to grow.” Without controls, some states could simply eliminate private insurance, she warned.

The most incredible part of the Republican style of health care plan...?

Many within the industry are worried that the next two years will be chaotic, with little support for the current market while states scramble to come up with a new way for individuals to buy policies. “It’s just basically injecting chaos in 50 state capitals for the next two years,” said Sabrina Corlette, a research professor at Georgetown University.

The CBO doesn't have time to do a complete score, and debate before the bill is voted on will be just 2 minutes long...that's right, just 2 minutes maximum. What was that about "ramming" ObamaCare down our throats after about 8 months of give and take debates and amendments? They are the party of "principles" alright.

Many within the industry are worried that the next two years will be chaotic, with little support for the current market while states scramble to come up with a new way for individuals to buy policies.“It’s just basically injecting chaos in 50 state capitals for the next two years,” said Sabrina Corlette, a research professor at Georgetown University.

Read The Graham Cassidy plan for real Americans: I also just found out, oddly not listed below, that the bill eliminates the employer mandate...WOW:

The new Senate Republican bill could reduce funding, coverage and consumer protections even more sharply than the GOP's previous repeal bill, the Better Care Reconciliation Act.
Here's how:
1. Establishes fixed state block grants that cap federal subsidies for coverage. The BCRA would have continued Obamacare's guaranteed subsidies to qualifying individuals.
2. Ends all federal subsidies in 2026, compared with no subsidy cutoff under the BCRA.
3. Ends Medicaid expansion entirely in 2020. The BCRA would have phased out enhanced funding in 2024 and let states continue expansion using standard federal match funds.
4. States could give insurers unlimited ability to consider pre-existing conditions to set premiums. The BCRA didn't allow that.
5. Eliminates the federal insurance exchange, which states could keep under the BCRA.
6. Offers $25 billion for two-year state reinsurance program. The BCRA offered $182 billion over a decade.
7. No dedicated funding for substance abuse treatment. The BCRA granted $44 billion to states for addiction and recovery care.
8. Doesn't require states to use federal block grant money to help lower-income people buy coverage, unlike the BCRA requirement that subsidies go to lower-income groups.
9. Allows states to waive coverage for preventive services. The BCRA continued ACA's first-dollar coverage for preventive care.
10. Redistributes federal subsidies from Medicaid expansion to non-expansion states—with 20 states receiving about 35% to 60% less than under Obamacare—versus smaller redistributions between the states under the BCRA.
Sources: Kaiser Family Foundation; Center on Budget and Policy Priorities 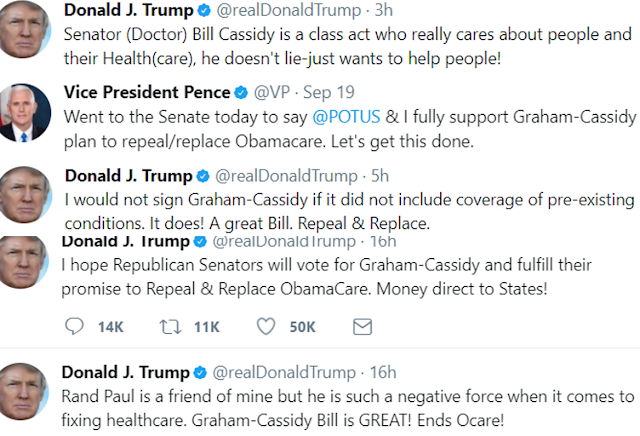