Well, what do you know, big talking state Republicans here and in Washington are gumming up the works trying to stop insurrections.

Rep. Mike Gallagher, after reaping the massive media coverage ripping Trump for the Capitol riots, locally and nationally, wasn't THAT angry apparently. Hey, thanks for your service Mike: 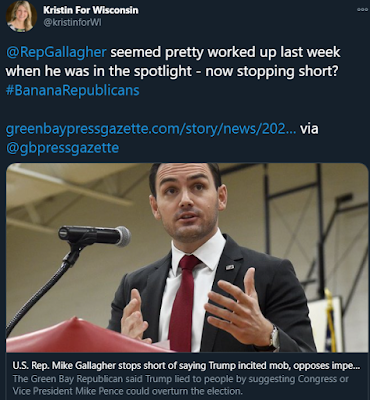 "Trump irresponsibly stoked a throng that included some mob elements and while he should’ve foreseen that there would be lawbreaking, I don’t think he intended a violent storming of the Capitol or the death of anybody,"

Lock Them Up, for Real! This is even more bizarre: Wisconsin's local seditious GOP traitors are gearing up for war, feeling like victims, and angry Trump had a difficult 4 years. How awful. After trying to unmask everybody in the state for their manly liberty and freedoms, it's time for war? JSONLINE: 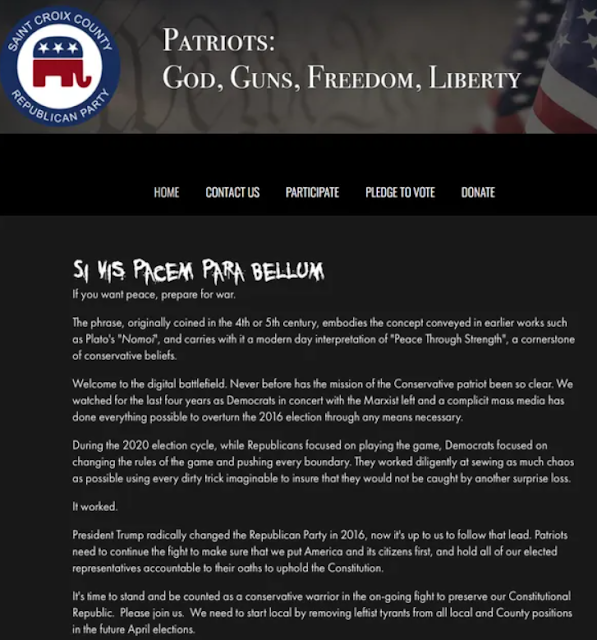 St. Croix County GOP chairman John Kraft, an IT professional, said the message was up before last Wednesday's violent, Trump-inspired revolt at the Capitol, and he "can't help what twisted inferences local Democrats choose to attribute to it."

Kraft was one of three litigants in the lawsuit to block Gov. Tony Evers' statewide emergency order requiring people to wear masks in public places.

In September, just days before a listening session about diversity and law enforcement in the Hudson Police Department, a commenter on the county GOP's Facebook page urged people to "bring your AR-15s and get rid of these communist Punk (expletive)."

And I haven't even brought up Rep's Tom Tiffany and Scott Fitzgerald's call to reverse the presidential election.
This line from a PBS Frontline email summed it up:

“Conspiracism has become a recognized and accepted way of exercising political power,” Nancy Rosenblum, co-author of A Lot of People Are Saying, told FRONTLINE. “[It] creates a kind of polarization in the population that’s much deeper than partisan polarization. It’s a polarization about what it means to know something. … Whether it returns to the fringes or not will depend on whether people in office can resist using it.”

Here's the Lincoln Projects take on the insurrection:
EXTRA:
Idaho ISP Silences Twitter and Facebook for "Censorship" of Trump: Suspending Trump and blocking seditionist websites wasn't just a good idea, it was a also a business decision. But in northern Idaho, affecting the Spokane, WA area as well, a local ISP seemed confused over this supposed "censorship." The Constitution protects us from GOVERNMENT censorship, not private censorship. So imagine peoples surprise when this happened...

T1 WIFI, confirmed it is blocking Facebook and Twitter from its WIFI service for some customers due to censorship claims...the company said too many customers had requested the sites be blocked, so it would block them for all customers. However, the company backtracked and said those who didn't request the sites be blocked would still have access.
"Our company does not believe a website or social networking site has the authority to censor what you see and post and hide information from you."

NOTE: When Trump repealed Net Neutrality, he actually prevented government from having some control over ISP's, because ISP's were at the time considered public utilities. But that control would not have effected this:

While Your T1 WIFI says they acted in response to censorship, the company's actions could also be considered censorship. In addition, they may violate Washington state's Net Neutrality law, which states that internet providers may not manipulate access to content.

That's why Net Neutrality was so important:

The law contains the following language: A person engaged in the provision of broadband internet access service in Washington state may not:
(a) Block lawful content, applications, services, or nonharmful devices, subject to reasonable network management.