Embarrassed yet? Republican voters chose Glenn Grothman as their next Representative, and now look what they got:

On top of that, Grothman vilified Democrats for winning elections through the support of Black Lives Matter. Because white nationalist militia groups are more in line with "real Americans?":

Loony tunes? Yes, and boy do they wallow in hating the left...

"There is an out of control hatred for Donald Trump among many Democratic congressmen that has caused them to twice use something that should happen once every hundred years for no lawful reason but just out of personal hatred," Grothman said.

But the calls to get tough with insurrectionist, rioters, and those posting deadly threats against elected officials and their families, will only result in more anger, so let's...reward that?

Rep.Tom Tiffany criticized the effort to remove Trump. "Speaker (Nancy) Pelosi’s insistence on moving forward with yet another misguided and partisan impeachment effort to remove a duly elected president … which will only exacerbate an already volatile situation.”

Rep. Mike Gallagher said he believes Congress has a duty to "land this plane" to uphold the ll of the voters and prevent further violence.

Much closer to home, and while the nations state Capitols are under threat of siege, Vos Republicans decided not to try stopping the insurrectionists or take the threat seriously: 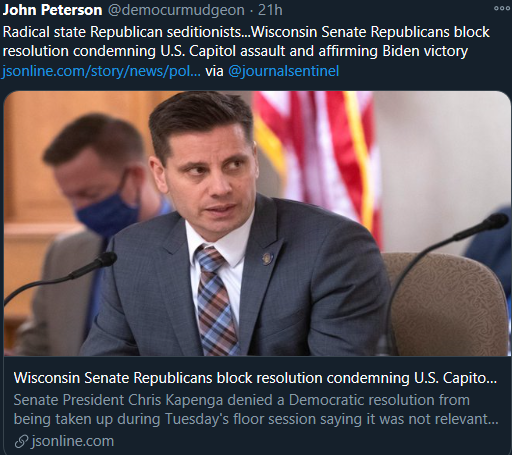 JSONLINE: Democratic Sen. Jeff Smith argued the resolution was relevant because of recent warnings from the Federal Bureau of Investigations that "armed protests" were being planned at every state Capitol in the country.

"I do believe it has a lot to do with the organization of not only this Senate but the protection of this building," Smith said in response to Kapenga's ruling, saying the FBI warning shows a direct threat to the Wisconsin State Capitol and its members. The move to block the resolution came as Gov. Tony Evers ordered the ground-floor windows of the Capitol be boarded up as a cautionary measure.

Something is wrong when Sen. Mitch McConnell sharply disagrees with Wisconsin Republicans.