The Tale of Two Capitols!

Trumpism on Display: Who knew? The riots, vandalism, and thuggery were actually left wing protesters and ANTIFA disguised as Trump cultists? Well, I guess you can't retire that myth.

After the Trump insurrection at our nations capitol by Trump-cult nationalists, militia losers, and QAnon terrorists, the conservative media is now trying desperately to downplay the nightmare witnessed by millions of American by comparing it to the 2011 protests in Madison. To start, protesters never broke into the Capitol building.

Despite the lack of vandalism, the Act 10 Scott Walker protests were supposed to make Trump's insurrection look good. Nope. Here's what Trump rioters left behind: 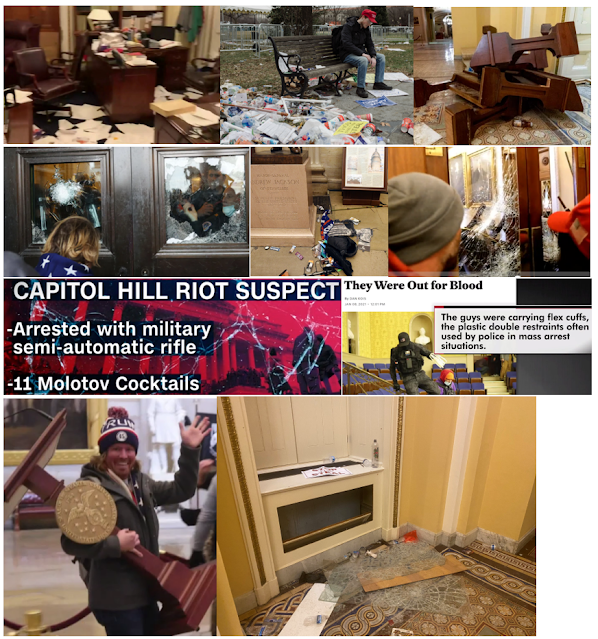 "Blood on statues and feces spread through the building are vile; mob attacks on police officers are bone-chilling."
Wisconsin's Capitol saw no Vandalism: Republicans whined about vandalism, but that turned out to be a lie. Surprised?:

No Vandalism either...according to PolitiFact, the highly publicized cost of repairs, do to protester vandalism, got all the necessary political mileage, despite being a Pants on Fire lie:

By March 7, 2011, the Department of Administration reported that all signs and banners in the Capitol had been removed. Some of the signs are being considered for preservation by the Wisconsin Historical Society or the Smithsonian Institution.

He called the demonstrators "evangelistic about their respect for the building." "The extent of what I saw today is just chips and nicks -- cosmetic damage," he said in an interview. "I don’t see how they (protesters) could have conducted themselves any better." Tish said the building bore the signs of the "accelerated cumulative effects of lots of people going through the building. I saw no intentional damage." The new estimate: $347,500, some 20 times less than the original one. And there are indications that even that could be high.

This smells like an effort to pour gas on the anti-protester fire. The claim was ridiculously high. And that gets a Pants on Fire rating.

More Irrelevant Scott Walker Fiction: Walker's first fictional work, a book titled "Unintimidated" - where he "canceled" the historical fact that he hid from the public during and after the protests - has now been followed up by this whopper of a story: 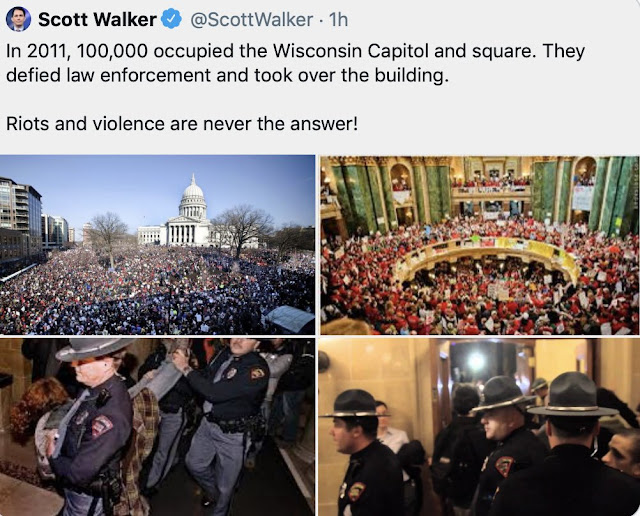 The picture shows police moving, not arresting, a protester from the halls.

Protesters did not Defy Law Enforcement by taking "over the building. In fact, Walker defied the law:

A judge’s order yesterday requiring Wisconsin Gov. Scott Walker to allow full public access to the Capitol here is being ignored by the governor and the state’s Republicans. Steven Means, lawyer for the governor, said the court order opening the Capitol carried no weight because it was “vaguely written.”

Walker Ban "Unconstitutional: After banning protests and charging a fee for preapproved protests and essentially banning indoor protests at the Capitol, the courts stepped in:

As nearly 400 citations issued to people for singing in the Capitol rotunda last summer without a permit make their way through the Dane County courts, Judge Frank Remington dismissed all such cases in his court March 10, finding the administrative rules for which they were cited unconstitutional.

Nations Capitol not the same as Madison's Capitol building: When Trump media tried to make the comparison between the two Capitol's, they were lying again:

One response to the criticism of the new DOA policy has been to compare the DOA policy to the rules governing demonstrations at the United States Capitol building. the U.S. Capitol building is not considered a public forum, while the Wisconsin State Capitol is.

The Nation Magazine summed it up best with this important point: According to the United States Department of the Interior, National Park Service, National Historic Landmark Nomination: “The soaring rotunda of the Wisconsin State Capitol is designed to induce its citizenry to be, as individuals, among the ‘resources of Wisconsin.’ Whereas some statehouses are maintained apart from the urban fabric, the Wisconsin Capitol Rotunda functions, both literally and symbolically, as a city center and is fully utilized as a public space to which all have claim.”