So, on top of just sitting back on the sidelines, armchair quarterbacking the COVID-19 pandemic, they're also proactively stripping public health safeguards that will keep the state's economy depressed longer. They now want to kill off the mask mandate, instead of giving it their approval. That should make people feel safer going out again.

Uh Oh, Consumers Stayed Home Before Stay-at-Home orders! GOP Wrong Again: The Republican rant centered on the Governor hurting businesses, whining about the mask mandate and crowd limits. They're the pro-business heroes blaming the tyranny of the governor, who shut everything down with stay-at-home orders.

No surprise, it turns out the public is a lot smarter than our game playing do-nothing Republicans. Blowup another ridiculous manufactured "job killing" line of BS:

WaPo: Critics have blamed states’ governors, typically Democrats, for job losses. But pandemic-related economic research shows the shutdowns aren’t killing jobs; the virus is. In the first outbreaks last spring, people stayed home to avoid contracting the deadly novel coronavirus, regardless of what their governor said. 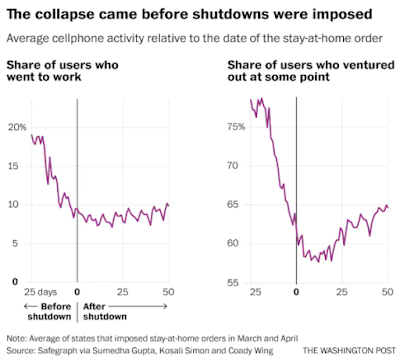 In every state, they stopped going to work around the weekend of March 14, as uncertainty soared, stock markets collapsed and the World Health Organization officially declared the coronavirus outbreak to be a pandemic. When business didn’t return appreciably faster in areas that lifted their shutdowns, it was clear that shutdowns couldn’t be the primary reason people were staying away from businesses.

Wisconsin Republicans would like you to believe this wouldn't have happened if they were in charge, but:

When we looked at job losses by the governor’s party, rural and suburban areas of red and blue states, (they) lost jobs and began to recover at almost exactly the same pace, regardless of which party was in charge. 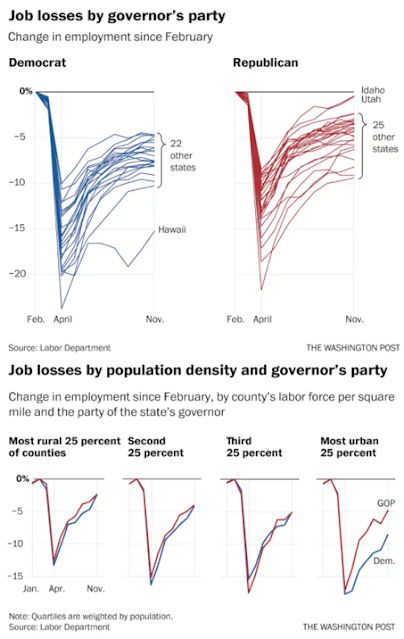 One other piece of supporting evidence? The economists found that businesses that drew the largest crowds before the pandemic were the same ones that saw the sharpest declines, relative to their size. That indicates consumers were spooked by the virus and sought out stores they knew were likely to have few customers. That trend was especially pronounced in areas with worse coronavirus outbreaks.