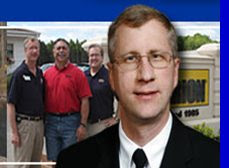 State Representative Kevin Petersen proudly wants to stick the university of Wisconsin with the bill again to "own up in part to the huge debt owed each and every hero." Here's how this phony patriot spun the GOP's irresponsible and unfunded "free" tuition program for veterans.

Governor Doyle echoed the state’s gratitude to veterans in his State of the State speech … with these words: “…four years ago, I was proud to sign a bill that ensures our veterans have the chance to get an education -- tuition-free -- at one of Wisconsin’s great universities or technical colleges.”

Because of changes Democrats added to Wisconsin’s budget, our veterans are now forced to apply for the federal Post 9/11 benefit prior to receiving any benefit from the Wisconsin GI Bill … the non-partisan legislative fiscal bureau : “In 2008-09, tuition was increased to generate $18 million in revenues to offset revenues lost by providing tuition and fees remissions to veterans.”

See, Republicans pass a law allowing veterans a free college education but didn't pay for it. More on that in a moment.

To restore Wisconsin veterans tuition benefits to the original intent, I’m introducing legislation which permits a student to receive full remission of academic fees … without regard to educational assistance under federal programs. In passing my bill, we own up in part to the huge debt owed each and every hero.

Here's what I wrote back to State Rep. Petersen: Tuition rose on every other students in the state, and they ended up paying for the Republican backed state GI bill. Patriot chest pounders like you didn't pay for the benefits.

Why shouldn't the federal funding run out first? Better yet, pay for the "free" tuition and put state money where your mouth and patriotism is. As I recall, Democrats asked Republicans where the funding would come from, and one of your partisan colleagues said the university already had enough money, they can pay for it.