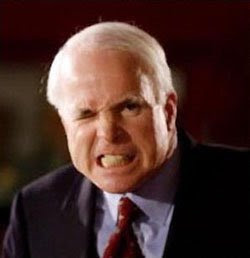 Now that the Democrats control congress and the White House, some Republicans still aren't quite clear on who's agenda Americans voted into office. Sen. John McCain still wants his health care plan enacted. It's only fair.
NY Times: Mr. McCain, a Republican from Arizona, said on the CBS news program “Face the Nation” that President Obama should sit down with Republican leaders and

...begin adopting some of their ideas for improving the nation’s health care system such as overhauling medical malpractice lawsuits, allowing residents of one state to buy health insurance from a company in another state, and granting tax credits for people who purchase health insurance on their own.

What's perfectly clear: McCain just laid out the Republicans health care insurance industry wish list. The Democrats all along should have discredited each and every one of those points. It's easy:
Tort reform lowers doctors insurance bills, lowers pay outs by insurance companies, but not insurance premiums for people. The CBO and independent research has found tort issues are unfounded. Tort reform penalizes victims, and doesn't do anything about the 98,000 people who die in hospitals each year as a result of preventable medical errors, costing the health care system $29 billion in excess costs. The dirty secret: Much of what can be identified as “defensive medicine” is motivated not by liability concerns but by the desire to generate more income.

Allowing residents to buy health insurance across state lines:It removes basic state mandated coverage, services states have found to be life saving and humane. Secondly, cheaper a-la-cart plans puts the patient at risk by excluding too many basic services, putting limits on treatments, even after paying monthly premiums, and hides those exclusions in small print legalise designed to be ambiguous in court challenges.

Granting tax credits for people who purchase health insurance on their own. The tax credits aren't indexed for inflation, are only a small part (a third or quarter) of the total premium and still "spreads the wealth" using other peoples money to pay for health insurance.

What part of any of this lowers health care costs for Americans?
Last I looked the Republican agenda blew up in our faces, and from McCain's suggestions, they still think they're in "control."
Posted by John Peterson, Democurmudgeon at 1/24/2010 06:00:00 PM