Mystery solved? I think we've come a little bit closer figuring out why farmers and rural voters like anti-government Republicans, even at the risk of their lives.

It's your Drinking Water...? Even when rural sources of drinking water are threatened with high levels of cancer-causing contamination, voters there still question the need for regulation or the need to know there's even a problem: A survey of private wells in southwestern Wisconsin found some 42 percent of 301 randomly selected wells tested in Iowa, Grant and Lafayette counties exceed federal health standards for bacteria that can come from animal or human waste, or for a toxic fertilizer residue. “The shallow bedrock and thin soils in southwest Wisconsin make this a vulnerable setting from the standpoint of groundwater contamination.”

But some "farmers are wary of being unfairly blamed for pollution." Well, do you see anyone else around, seriously? Maybe it's the cost of replacing these...

It’s possible that faulty septic systems are causing some portion of the contamination, or that wells need to be upgraded.

Researchers plan to determine if manure from dairy or swine operations or faulty septic systems are the main culprit in tainted drinking water in southwest Wisconsin. The first scientific study of drinking water quality there found that four out of 10 wells were contaminated by dangerous bacteria or chemicals. If the presence of the bacteria is confirmed, Abbott said residents should stop drinking their water until they can have their well disinfected.

Walker's Water Pollution Legacy Exposed: I suppose you could say Scott Walker saved rural areas some money thanks to special interest groups, but at what cost? In what can be described as mindbogglingly irresponsible, Walker let the problem fester out of control. He only relented in the last few months as governor, well after the fact and after he had no choice:


JS: In the east, Kewaunee and Door counties have long had problems with contaminated drinking water. After years of pressure from residents and the federal government, Walker approved the new manure standards. But the Wisconsin Dairy Business Association fought to narrow the rule, and it was limited to the 15 eastern counties. State geologist Ken Bradbury said enough was known about conditions in the southwest part of the state to justify applying the manure regulations there, too.

Not only is this an example of bad governing (making the case that government is bad), but look at what Walker did to sabotage efforts to save peoples drinking water. You can't make this stuff up: 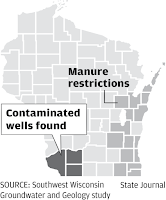 The regulations aren’t yet being enforced because required technical standards weren’t included in the rule approved in 2018 by the Natural Resources Board and Gov. Scott Walker after two years of work by the DNR ... It’s unlikely the technical standards will be written and approved in less than 18 to 24 months, said Lacey Cochart, director of DATCP’s bureau of land and water.

And don't look to the DNR, or what's left of it, because politics, not science is their thing now: