Walker Foxconn Legacy in Shambles, Gov. Evers to clean up another mess.

No one could tell clueless Scott Walker and his self-serving know-it-all Republican majority how quickly technology changes. For them Foxconn was their first look at the wonders of electronics. But...

What Foxconn offered Walker and the panting Republicans was well beyond their limited view of tech as things undeserving poor people had, like flat panel plasma TV's and Obama cellphones. Tech things were used more as epithets than real things that created jobs and grew economies.

But tech TV's and phones do change and it changes fast enough to sink Walker's Foxconn vision of a Manufacturing Renaissance:


Foxconn's decision to suspend work on the two plants because of "weakening macroeconomic conditions and the uncertainties brought by the trade war" and in Wisconsin, "as a result of negotiations with new Gov. Tony Evers."

That's right, just a year after the deal, tech has changed so much already that Foxconn had to suspend construction of their new plant here and in China for 6 months. Believe it or not, Foxconn is wondering what to do now:

Foxconn's Thursday statement hinted at its new focus for the Wisconsin plant, saying the global market had "necessitated a reconsideration of which technology will best suit the needs of its customers." Louis Woo, in the interview, said about three-quarters of Foxconn's eventual jobs will be in R&D and design—what he described as 'knowledge' positions—rather than blue-collar manufacturing jobs."

That's far different from the now wacky prediction by WEDC CEO Mark Hogan. But seriously, it sounded dumb then too. Remember this, Republicans blocked Evers from getting rid of WEDC because they're business geniuses. From Upfront with Mike Gousha:

Gousha: "What would be the message if for some reason this deal got bogged down, and didn't happen..."


If everything in the Foxconn deal came true...


A legislative analysis said the state wouldn't financially break even on the deal until 2043...

Now, just a year later, the market changed a lot, and many taxpayers have already seen their local government spend lots of money... 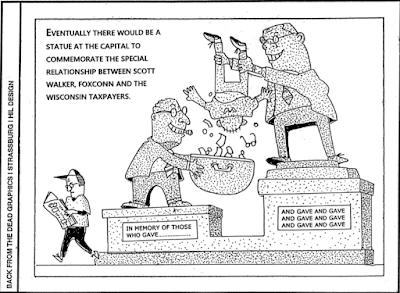 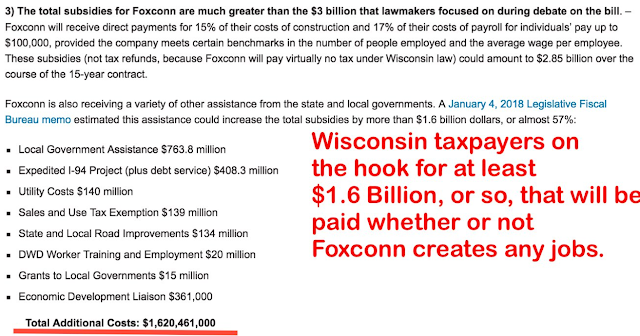 I'm just guessing here, but even if Foxconn misses a few deadlines, if they eventually make good on their agreement, they get all the incentives they missed, meaning Wisconsin can't spend that money on other things for the life of the contract.

Walker Gives UW Intellectual Rights away to Foxconn, worth billions: Don't be surprised if Wisconsin misses out on billions of dollars of IR rights. While Trump tries to protect U.S. corporate intellectual rights in China, Scott Walker was actually giving them away:

Urban Milwaukee: Who would have the IP rights? “The cooperation agreement lists three different types of research agreements ... two agreement types grant Foxconn the intellectual property that comes of research.” That seems like a problem for UW faculty,” the story reports. “The fruits of research at UW belong to the people of Wisconsin, not to a private corporation,” the UW-Madison Teaching Assistants Association declared in a statement to the State Journal.

Does Foxconn also have its eyes on the intellectual property of area businesses? Louis Woo, a top assistant to Gou, told the Business Journal: “We will be working with a lot of technology-related companies, if not only in Wisconsin, then around the Midwest ... partners in that effort could include Wisconsin businesses such as Rockwell Automation.”

One tech industry insider tells me he talked to Foxconn representatives who said Rockwell CEO Blake Moret met with Foxconn leaders about Rockwell doing contract manufacturing for Foxconn. But Foxconn eventually noted it would get intellectual property rights to any products it made. “Moret blew up and walked out of the meeting,” the source says.

Robin Vos blames Evers for Foxconn: Even after just a month as Governor, Tony Evers is now being blamed for Foxconn? Sure, why not. Note: Vos is claiming economic uncertainty from Evers? Even though the national economy is still running hot after Trump broke all trade deals, levied tariffs, shut down the government, lashed out and asked for boycotts of Harley Davidson and other companies, and is threatening to take everyone's health care away. It's gonna take a lot of uncertainty to hurt Wisconsin's economy?


What have Republicans had to say about the Foxconn story? They are blaming Democratic Gov. Tony Evers. In a statement, Assembly Speaker Robin Vos and Senate Majority Leader Scott Fitzgerald said this: "We don’t blame Foxconn for altering plans in an ever-changing technology business. It’s also not surprising Foxconn would rethink building a manufacturing plant in Wisconsin under the Evers Administration. The company is reacting to the wave of economic uncertainty that the new governor has brought with his administration.”

Not Really Evers Problem, Yet: Consider this...


“Robin Vos and legislative Republicans grabbed control of the agency in charge of the Foxconn deal and slashed accountability after losing the Governor who cut this horrible cocktail napkin deal,” said One Wisconsin Now Executive Director Analiese Eicher. “The question now is: what did they know about Foxconn’s plans to drastically cut back their end of the bargain, and when did they know it?”

Suddenly Foxconn Related Tweet about Wealth Tax: I had to include this growing tweet storm over Walker's dumbest analogy yet:

Ousted Wisconsin Gov. Scott Walker (R) opened himself up to a deluge of ridicule and scorn on Twitter Thursday afternoon after attacking Sen. Elizabeth Warren (D-MA) for a proposal to increase taxes on the wealthy. Less than 24 hours later (Foxconn deal suspended news) the former governor — who notably dropped out of college — was attacking Warren, a former college professor who specialized in bankruptcy law — about economics