Wis Republicans says, "make sure renewable's are reliable and affordable"...uh, which they are already!!!


Unlike the few strong Democratic legislators who's voices are often ignored by the press, Gov. Evers will not suffer that same fate.

And Republicans are panicking. Look how fast they tried to reframe the idea of middle-class tax cuts and protections for preexisting conditions. Same old out-dated policies. Only now the public will see how stagnant and empty their rhetoric has been for 8 years.

Alternative Energy Ignorance Exposed: Thankfully, you can't hide stupid. Check out what one arrogant Republican legislator said about the prospects of turning Wisconsin into a job-creating renewable energy leader:


At the annual conference held by the group RENEW Wisconsin, (a) panel following Evers' remarks, Rep. Mike Kuglitsch (R- New Berlin) said he wants to make sure electricity generated from renewables is reliable and affordable, and expansion is driven by the free market.

Wow, where do I start? It's hard to believe anyone could be this out of touch. "Making sure" is code for delaying any change, a tactic that assumes we just don't know enough about wind and solar energy yet (see at bottom what we do know, and what we're missing).

1. Wind is now cheaper to produce than coal, so it's affordable, okay? This is not a secret.

2. Try reading a newspaper sometime. Surprise, many big energy companies are committed and "driven," having promised a massive conversion to solar and wind (they don't have to ship fuel or pay for it). Hello?

3. Reliable? Would we be importing unreliable clean energy from outside Wisconsin? Why not be someone else's source of reliable energy by producing it here? And the use of recycled batteries to store energy for later use has already made an impact.

Time to bring in "Alternative Legislators" pushing Alternative Energy: The sad reality of gerrymandering makes it almost impossible to change Wisconsin's direction on energy...or anything for that matter. We'll be stuck in this same place for years, even decades trying to catch up. 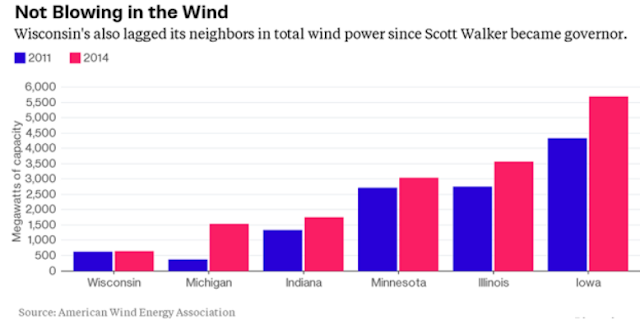 So let's be clear about what Wisconsin Republicans are choosing to take a pass on...


The U.S. Bureau of Labor Statistics’ #1 and #2 fastest growing jobs in the U.S. are solar panel installers and wind turbine technicians. These jobs are good, solid middle class jobs with annual salaries pushing close to six-figures. Beyond construction, the plants (particularly wind farms, with their many moving parts) offer good jobs in the long term.

Not only do wind and solar power bring jobs, they increase the local tax base for revenue-starved public schools and other districts. For example, Nolan County in Texas has seen its tax base increase almost eight fold to nearly $3 billion dollars since the West Texas wind rush began.