Now that Paul Ryan is no longer peddling his supposed "patient centered" health care plan, we will no longer be insulted by his dumb contradictory statements like the quote below. Think about it, an insurance based system...without empowering insurance companies...really?:

“Obamacare should be replaced with patient-centered reforms that empower individuals and their doctors, not bureaucrats and insurance companies.” -Ryan


Ryan’s plan would provide tax credits based on age instead of income, encourage the sale of health insurance across state lines and reestablish high-risk pools for people with complex medical conditions.

Note: High risk pools are actually government run and funded partially by taxpayers, aided by sky high customer premiums and deductibles, some limits, and they usually end up in the red. What a deal.

What was obvious from the start was how disconnected politicians like Ryan and Trump were from the horrors and complexities of our real health care system. Now with Trump in charge, we're seeing just how incompetent the Republicans solution is, and how it doesn't come close to being a consumer product:

On Jan. 1, hospitals began complying with a Trump administration order to post list prices for all their services, theoretically offering consumers transparency and choice and forcing health care providers into price competition. It’s turning into a fiasco.

Jeanne Pinder, the founder and chief executive of Clear Health Costs, a consumer health research organization said, “The posted prices are fanciful, inflated, difficult to decode and inconsistent, so it’s hard to see how an average person would find them useful.” The data, posted online in spreadsheets for thousands of procedures, is incomprehensible and unusable by patients — a hodgepodge of numbers and technical medical terms, displayed in formats that vary from hospital to hospital. It is nearly impossible for consumers to compare prices for the same service at different hospitals because no two hospitals seem to describe services in the same way. Nor can consumers divine how much they will have to pay out of pocket.

Here's one persons revealing take on the new "free market" based posted prices that supposedly will help her shop?

“This is gibberish, totally meaningless, a foreign language to me,” said Sara Stovall, 41, of Charlottesville, Va., after looking at price lists for hospitals in her area. She reviewed the price lists for Sentara Martha Jefferson Hospital and for University Hospital, each of which has more than 16,000 items. 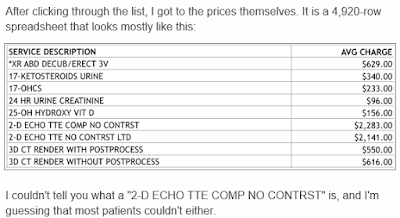 Add to this list confusing list what your insurance company is contracted to pay...oh wait, you can't:


It doesn't show the prices that insurance plans negotiate for the patients that they cover.

Add to this those surprising medical bills from out of network doctors who helped treat your conditon. California is attempting to solve that problem, but again, this is a free market voluntary thing:


Hospitals' solution to surprise out-of-network bills: Make physicians go in-network: Some hospitals have turned to a bold strategy to prevent patients from receiving surprise medical bills from out-of-network providers: requiring in-hospital physicians to contract with the same insurers as the hospital.

Which brings me to a few conclusions:


1. Posting hospital prices only works under a universal health care pricing system, where the nation set a max price for treatment, and lets the private sector compete with lower prices if they choose.

2. Take all the new innovations for saving health care costs now under the ACA, and make it a part of Medicare for all or universal health care.

But the conservative magical thinking that the private sector won't rip you off or will be forced to compete is ridiculous. Here are few more jaw dropping thoughts:


1. The Trump administration did not define “standard charges.” In later guidance, it said the format was “the hospital’s choice.” “Without a standard definition, patients cannot make accurate comparisons between hospitals,” said Herb B. Kuhn, the president of the Missouri Hospital Association.

The Trump administration has not said how it plans to enforce it. Federal officials have asked the public to suggest “enforcement mechanisms.”

2. Even while complying with the new requirement, many hospitals have posted disclaimers warning consumers not to rely on the data.

The University of Texas MD Anderson Cancer Center, for example, says that it “does not warrant the accuracy, completeness or usefulness” of the charges listed on its website.